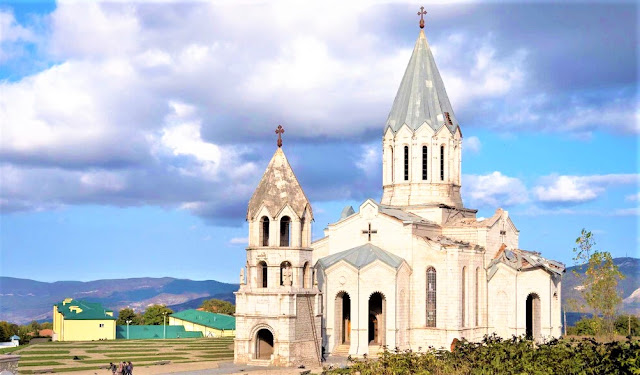 Shushi (Agenzia Fides) - The Armenian Cathedral of the city of Shushi, in Nagorno Karabakh, dedicated to Christ the Savior, was hit by a launch of missiles on Thursday, October 8, which caused significant damage to the roof of the Christian church. The Armenian authorities attributed the bombing to the Azerbaijani army, in the context of the new military escalation in the region, yet another episode of the thirty-year conflict in this area which sees the two former Soviet republics in opposition (see Fides, 3/10/2020).

For their part, the Baku political and military authorities have denied the allegations made by the Armenian government, arguing that "in contrast to the actions of the Armenian armed forces, the Azerbaijani army does not attack historical and cultural objects, especially religious buildings and monuments".

The 30-meter-high Cathedral of Christ the Savior, built between 1868 and 1887, was also used as a weapons depot by the Azerbaijani army in the early 1990s during the first outbreak of the conflict.

In the past few days, in an interview with Armenpress, Armenian Patriarch Karekin II defended himself against attempts of provoking a religious conflict between Christians and Muslims in the context of the military escalation in Nagorno-Karabakh. "Armenian people", said Patriarch Karekin, "began to spread all over the world since the Middle Ages, and even more so after the Armenian genocide in Ottoman Turkey. Many Islamic countries have extended a fraternal hand to the children of the Armenian people who survived the Genocide and welcomed them. These Armenian communities still exist. Our Holy Armenian Apostolic Church has dioceses and parishes in a dozen Muslim-majority countries where the sons and daughters of our people live as exemplary citizens, contributing to the prosperity of these nations and enjoying the friendly attitude of the local authorities".

In this context, Patriarch Karekin II also recalls that at the beginning of the Nagorno-Karabakh conflict, "thanks to the mediation of the Patriarchs of the Russian Church, a platform for trilateral meetings was created, in which representatives of the Muslims of the Caucasus and the Catholicos of all the Armenians had taken shape. During these meetings, it was repeatedly highlighted that the conflict in Karabakh has no religious roots. The need for peaceful and harmonious coexistence between the Christian and Muslim populations of our region was also reiterated".

"Today", concluded the Catholicos of all Armenians, "we regularly experience the desire of Azerbaijani President to attribute a religious aspect to the conflict in Karabakh. This is a provocation that can unfortunately have terrible consequences". (GV) (FULL TEXT Release: Agenzia Fides, 9/10/2020)