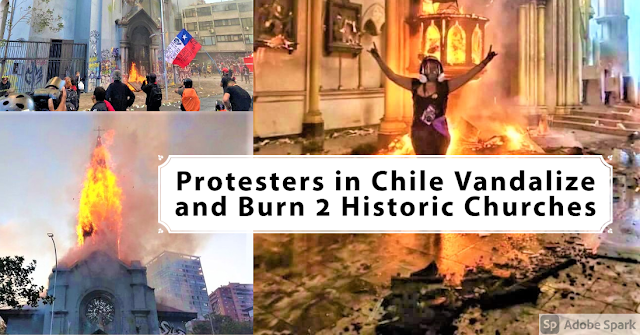 Violent protests in Chile led to an attack on 2 churches, with the church tower torched.

The church tower was deliberately set on fire at Santiago de Chile  In the course of violent unrest, churches have also been targeted in Chile. Protesters entered the San Francisco de Borja church in the capital Santiago de Chile on Sunday, another church was also stormed. The steeple of one of the two churches went up in flames, its fall was greeted with cheers. The riots are taking place in advance of the Chileans voting on the referendum on whether to replace the constitution which has been in place from the time of the Pinochet dictatorship. Also, the unrest commemorated the one-year anniversary of the mass protests, in which over 30 had been killed and several thousand injured. Tens of thousands of demonstrators took part in the protests on Sunday, October 18, 2020.

Matt said…
The church stands for order, these protesters hate order,they love chaos.
October 20, 2020 at 8:56 AM