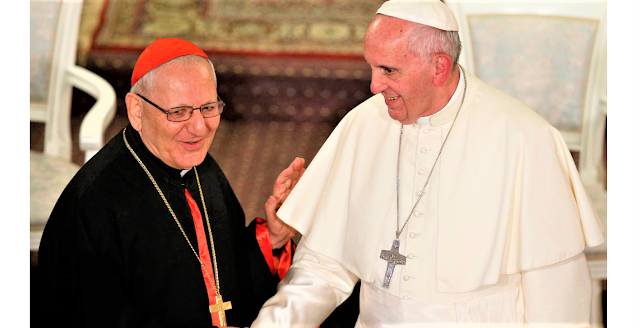 ASIA/IRAQ - Fides report: Chaldean Patriarchate denies rumors of the Pope's “opening” to marriage for homosexual couples
Tuesday, 27 October 2020 Iraqi Christian appointed at the top of the National Investment Authority Baghdad (Agenzia Fides) -
It is completely false to say that Pope Francis expressed his approval for same-sex marriage, modifying the doctrine of the Catholic Church.
The Chaldean Patriarchate, led by the Patriarch Cardinal Louis Raphael Sako, clearly underlines this in an official statement released by the Chaldean Patriarchate. The Patriarchate's press release refers to misleading reports that are also circulating in Iraq and refer to some passages in the documentary "Francesco", by Russian-born US citizen and director Evgeny Afineewsky, which was shown at the Rome Film Festival on 21 October. The Catholic Church and other Churches - the statement reads - recognize that only natural marriage between male and female "is according to divine plan", and thus in the eyes of the Church only the marriage between a man and a woman respects the law of God and can be raised to the dignity of a sacrament. In Western countries - the Patriarchate adds - Churches are separate from the State, and civil governments also enact laws that do not conform to the Church's doctrine, such as those that decriminalize or legalize abortion.
Also in the documentary, which serves as a pretext for the supposed opening of the Pope to so-called "homosexual marriages", the statement of the Chaldean Patriarchate of the points out that in reality, even in the extracts taken from an old interview, Pope Francis "does not use the term" 'marriage' in reference to homosexuals. The Pope invites civil society and families to embrace love and protect homosexuals, and he is not saying that they have the right to form a family ".
In conclusion, the declaration of the Chaldean Patriarchate emphasizes once again that the Pope "never spoke of a possible integration of homosexuals into a natural marriage recognized by the Church" and repeatedly emphasizes what the Catholic Church teaches in this regard, as marriage only recognizes "permanent union between a man and a woman". (GV) (Full Text Source: Agenzia Fides, 27/10/2020)
SEE ALSO: FULL TEXT Release from the Chaldean Patriarchate

Social media and some satellite channels reported news that the Pope had approved same-sex marriage and changed the belief of the Catholic Church. This is not true at all. The Catholic Church and other churches consider the natural marriage between male and female of divine determination, and it is the only legal marriage, which the Church considers a sacrament of its seven sacraments.

The film about the life of Pope “Francesco”, which covers the activities of Pope Francis, includes a clip in which he says: It is civil society that decides the union of homosexuals.

The Pope never uses the term "marriage" for homosexuals. The Pope called on civil society and families to care for, love and protect homosexuals, and he did not say that they should form a family. As for his saying that all are children of God, this is due to the fact that God created man, and therefore he is his son. And God alone is the judge and no one else.

The Pope did not discuss the incorporation of homosexuals into a natural, ecclesiastical marriage. On the contrary, he stresses the Catholic Church's belief that marriage is a lifelong partnership between one man and one woman.

We wish the media to be accurate