In New Documentary Film "Francesco" by Evgeny Afineevsky - the Pope explains that Homosexuals are "Children of God" and need a "...civil union law; that way they are legally covered.” - Watch Official Trailer 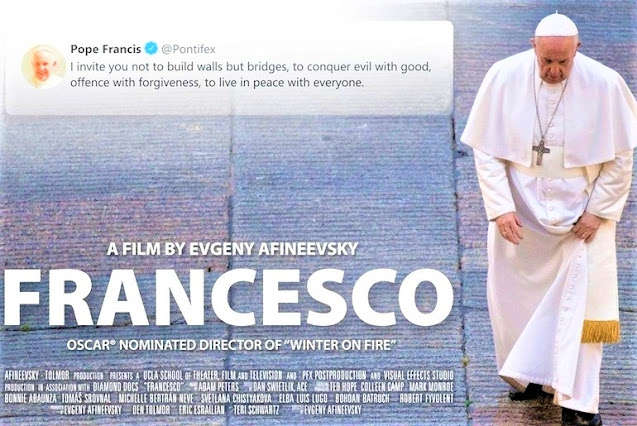 The new documentary “Francesco”, by Oscar nominated director Evgeny Afineevsky, includes exclusive interviews with Pope Francis himself, with Pope emeritus Benedict XVI, and many others.
At one point during the film, the Pope explains, “Homosexual people have the right to be in a family. They are children of God,” He further clarifies, “You can’t kick someone out of a family, nor make their life miserable for this. What we have to have is a civil union law; that way they are legally covered.”

Pope Francis, had never come out publicly in favor of civil unions. The Catholic Church still bans same-sex marriage and explains homosexual acts as "disordered," a teaching that has not altered. Argentina legalized same-sex marriage in 2010, which then-Cardinal Jorge Bergoglio called a “destructive attack on God's plan.”

According to Vatican News, the film premiered on Wednesday, Oct. 21, 2020, at the Rome Film Festival in the Special Events Section. Then on Thursday, in the Vatican Gardens, it will receive the 18th Kinéo Prize. The "Kinéo Movie for Humanity Award" is awarded to those who promote social and humanitarian themes. This year, it will be personally awarded by Rosetta Sannelli, the creator of the award, who underlined the film's historic value. "Every one of Pope Francis' journeys to various parts of the world," she said, "is documented in Afineevsky's work through images and news footage, and reveals an authentic glimpse into the events of our time."
Evgeny Afineevsky finished shooting "Francesco" last June, in the midst of the Covid-19 pandemic.
He highlights images exploring various themes such as the pandemic, racism and sexual abuse.
The premiere of "Francesco" in the United States is scheduled for October 25 at the Savannah Film Festival. The film is produced in part with the UCLA School of Theater, Film and Television. Director Evgeny Afineevsky was nominated for an Oscar and Emmy in 2016 for his film "Winter on Fire" and in 2018 received 3 Emmy nominations for "Cries from Syria".
FRANCESCO is the latest film from Oscar and Emmy-nominated Director Evgeny Afineevsky, featuring exclusive interviews with His Holiness Pope Francis, His Holiness Pope Emeritus Benedict XVI, Mark Kennedy Shriver, Sister Norma Pimentel, and Juan Carlos Cruz, among others. FRANCESCO is not a biographical film about Pope Francis in the traditional sense. Rather it is a film that shows us the world as it is today and a path to understanding what a better future can be for tomorrow as seen through the remarkable work of the Pope in the areas of climate change, migration, refugees, peace and religious tolerance, gender and identity justice, health and economic equality, and, by example, the meaning of inspired leadership.
Source: https://www.francescofilm.com/ and VaticanNews.va