Pope Francis Explains "Thus, situations can occur where, in touching money, we get blood on our hands, the blood of our brothers and sisters." FULL TEXT to Moneyval 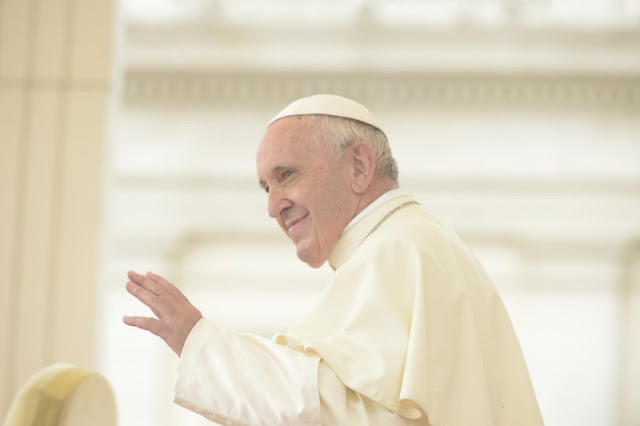 TO THE COMMITTEE OF EXPERTS FROM THE EUROPEAN COUNCIL (MONEYVAL)

I offer you a cordial welcome on the occasion of your visit as experts of the Council of Europe for the evaluation of measures taken to counter money laundering and the financing of terrorism. I thank the President of the Financial Information Authority for his kind words.

Your work on this double front is particularly dear to my heart. Indeed, it is closely linked to the protection of life, the peaceful coexistence of the human race on earth, and a financial system that does not oppress those who are weakest and in greatest need. It is all linked together.

As I wrote in the Apostolic Exhortation Evangelii Gaudium, I consider it necessary for us to reflect anew on our relationship with money (cf. No. 55). It seems that in many places the supremacy of money over human beings is taken for granted. Sometimes, in the effort to amass wealth, there is little concern for where it comes from, the more or less legitimate activities that may have produced it, and the mechanisms of exploitation that may be behind it. Thus, situations can occur where, in touching money, we get blood on our hands, the blood of our brothers and sisters.

It can also happen that financial resources are used to spread terror, to shore up the strongest, the most powerful and those prepared to sacrifice the lives of their brothers and sisters without a scruple, all in a bid to hold onto their power.

Saint Paul VI proposed setting aside the monies spent on military expenditures to create a global Fund to relieve the needs of impoverished peoples (cf. Populorum Progressio, 51). I returned to this proposal in my recent Encyclical Letter Fratelli Tutti. There I asked that, instead of investing in fear or nuclear, chemical and biological threats, we use those resources “finally to put an end to hunger and favour development in the most impoverished countries, so that their citizens will not resort to violent or illusory solutions, or have to leave their countries in order to seek a more dignified life” (n. 262).

The Church’s social teaching has underscored the error of the neoliberal dogma (cf. ibid., 168) which holds that the economic and moral orders are so completely distinct from one another that the former is in no way dependent on the latter (cf. Pius XI, Quadragesimo Anno, ed. Carlen, 42). In light of the present circumstances, it would seem that “the worship of the ancient golden calf (cf. Ex 32:1-35) has returned in a new and ruthless guise in the idolatry of money and the dictatorship of an impersonal economy lacking a truly human purpose” (Evangelii Gaudium, 55). Indeed, “financial speculation fundamentally aimed at quick profit continues to wreak havoc” (Fratelli Tutti, 168).

Policies aimed at countering money laundering and terrorism are a means of monitoring movements of money and of intervening in cases where irregular or even criminal activities are detected.

Jesus drove merchants from the temple precincts (cf. Mt 21:12-13; Jn 2:13-17) and stated: “You cannot serve both God and money” (Mt 6:24). Once the economy loses its human face, then we are no longer served by money, but ourselves become servants of money. This is a form of idolatry against which we are called to react by reestablishing the rational order of things, which appeals to the common good,[1] whereby “money must serve, not rule” (Evangelii Gaudium, 58; Gaudium et Spes, 64; Laudato Si’, 195).

To implement these principles, the Vatican recently introduced into its legal system measures aimed at ensuring transparency in the management of money and preventing money laundering and the financing of terrorism. On 1 June last, a Motu Proprio was issued for a more effective management of resources and for the promotion of transparency, oversight and competition in the procedures for awarding public contracts. On 19 August last, an Ordinance of the President of the Governorate required volunteer organizations and juridical persons of Vatican City State to report suspicious activities to the Financial Information Authority (AIF).

Dear friends, I thank you once more for the service you provide; I consider it thus, a service, and I thank you. The measures that you are evaluating are meant to promote a “clean finance”, in which the “merchants” are prevented from speculating in that sacred “temple” which, in accordance with the Creator’s plan of love, is humanity. Thank you once again. I offer all of you my best wishes for your work and I ask you, please, not to forget to pray for me.