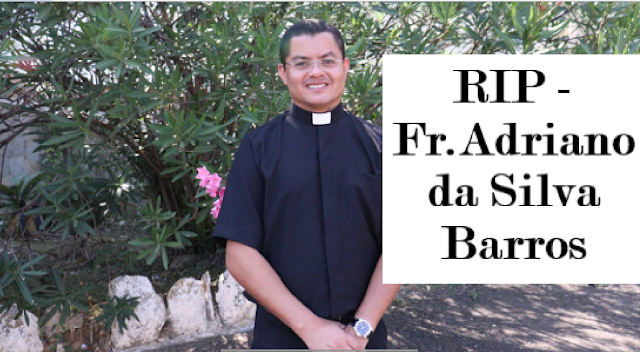 Caratinga (Agenzia Fides) - "The Diocese of Caratinga informs with great regret the death of Fr. Adriano da Silva Barros, parish vicar of São Simão parish, in Simonésia, MG. Fr. Adriano had disappeared in the early afternoon of 13 October, when he was last seen in Reduto-MG. On the night of 14 his lifeless body was found in the vicinity of the city of Manhumirim. The initial hypothesis, still under investigation by the police authorities, is that he was the victim of an armed robbery": with these words the diocese of Caratinga, in Brazil, announced to the faithful the violent death of the priest.

"In the firm hope of the resurrection, we bless God for his fruitful priestly ministry, lived with zeal and fervor, in these five months, since his ordination on May 3", reads the statement sent to Fides.

Father Adriano da Silva Barros was 36 years old. A first police report indicates that he was killed with a knife, but the body was then set on fire. A farmer in the rural area of Manhumirin, seeing the fire from afar, gave the alarm.

The priest's funeral was celebrated on Thursday 15 October, in the parish of the municipality of Martins Soares, his native land, presided over by Mgr. Emanuel Messias de Oliveira, Bishop of Caratinga, and concelebrated by the priests of the diocese. (CE) (FULL TEXT Release: Agenzia Fides, 16/10/2020)