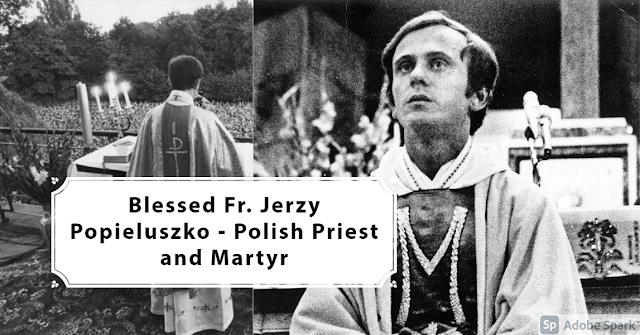 Biography of Blessed Jerzy Popiełuszko  Fr. Jerzy Popieluszko was born on September 14, 1947 in Poland on the feast of Holy Cross Day. He was  the fourth child born to Marianna and Wladyslaw Popiełuszko. Two days later, he was baptized in his family  parish church in Suchowola. His mother, still in a blessed state, offered him up as a servant God. In 1954, he started elementary school and then continued his education in the local high school. After  graduation, he entered the seminary in Warsaw. After a year of study, he was drafted into the army and  inducted into a special unit created to destroy priestly vocations among young people. Two years in the army  had adversely affected his health. Later it even interfered with his priestly ministry. He was ordained at the hands of Cardinal Stefan Wyszynski on May 28, 1972.  During the years 1972-1980 he was a vicar in the following parishes: Holy Trinity  in Zabkach, Our Lady of the Rosary  and Child Jesus in Warsaw. Due to  his failing health and inability to continue the duties of a vicar, he was assigned to  work with students in St. Anne’s Church in Warsaw. In 1979, he began his priestly  ministry as a chaplain to medical workers in the archdiocese of Warsaw.

On May 20, 1980 he was transferred to the St. Stanislaus Kostka Parish in  Warsaw. There he continued his ministry and assisted in the parish as a resident.

On August 31, 1980, at  the request of Cardinal Stefan Wyszynski he celebrated Mass for striking workers. This was the beginning of  his ministry among workers.  All along, Fr. Jerzy was involved in assisting the needy – especially families with many children, poor, and  close to those in prison camps. He collected food and medicine for them. He attended hearings of those  arrested for interfering with martial law. He supported political prisoners.

In February of 1982 he started  celebrating Mass on the last Sunday of every month for freedom of Poland. As months passed, more and  more people came from near and far to participate in the Mass.  The communist leaders at that time were not pleased with the actions of Fr. Jerzy and the respect he was  enjoying from people all over Poland. More and more often things happened that were meant to scare  Fr. Jerzy and force him to resign from ministry. Twice his home was broken into, he was constantly being  followed, harassed, stopped by police. His home was bombed and his car was doused with paint. At the  same time letters were arriving at the Bishop’s office complaining that his sermons „were consistently taking  aim at the People’s Republic of Poland”. In September 1983, a case was brought against him accusing him  of „excessive use of his rights as a priest in an effort to cause harm to the People’s Republic of Poland.”

In  December 1983 he was arrested. Upon the intervention of the Church, he was released. He was facing a  possible 10 years in prison. From January to June 1984, he was interrogated 13 times. His prison sentence  was later dropped as a result of the amnesty program of 1984. However, simultaneously a slander campaign  was being conducted by Jerzy Urban, the then spokesman for the government newspaper.

On October 13, 1984, near the town of Ostróda an attempt was made on the life of Fr. Jerzy Popieluszko  who was returning from Gdansk to Warsaw.

On October 19, along with the driver Waldemar Chrostowski he  travelled to Bydgoszcz. At 6:00pm on that day, he celebrated Rosary Devotions and Holy Mass in Polish  Saints Martyred Brothers Church.

On their return trip at about 10:00pm he was abducted in a place called  Przysiek near Torun by three members of the Ministry of Internal Affairs. He was brutally beaten, he was tied  up in a way that any movement caused the noose to tighten around his neck, and then he was locked in the  trunk of a car. A boulder weighing about 24 pounds was tied to his legs, and he was thrown into a tributary of  the Wistula River near Wloclawek.

His body was finally found on October 30. On November 2 after an  autopsy was performed, a ceremonial farewell was conducted for Fr. Jerzy in Bialystok, and his remains were  transferred to St. Stanislaus Kostka Church in Warsaw. An all night prayer vigil was organized for the  murdered priest. His body was buried on the grounds of the St. Stanislaus Kostka Parish in Warsaw.  Hundreds of thousands of faithful people from all over Poland participated in the funeral.

At the funeral Mass,  6 bishops and more than a 1,000 priests concelebrated. Since then, the burial place of Fr. Jerzy has been a  site of special prayer. Since interment, the grave of the Martyr has been visited by more than 18 million  people from all over the world.

On June 14, 1987, a Servant of God, John Paul II prayed there. A  spontaneous yet live worship of the Martyr which began immediately after his death continues to this day.  The St. Stanislaus Kostka Parish continuously receives affirmations that graces are being obtained through  the intercession of Fr. Jerzy.

He was beatified on June 6, 2010 in Warsaw’s Piłsudski Square. His mother, Marianna Popiełuszko, who had reached 100 years of age a few days earlier, was present at the event.