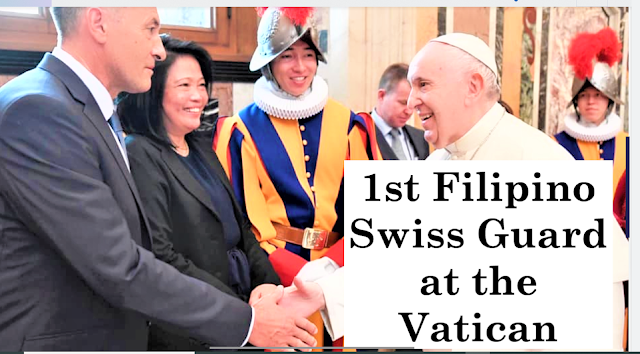 By CBCP News
October 9, 2020
Manila, Philippines
For the first time, the Vatican has sworn in a Swiss with Filipino parentage as member of the Swiss Guard, the elite corps of soldiers who protect the pope.
Vincent Lüthi was among the 38 new recruits who took oath of allegiance to Pope Francis in the Vatican on October 4.
The 22-year-old grew up in Cugy, Switzerland and the only child of a Swiss father and a Filipino mother from Santa Fe town on Bantayan Island in Cebu province.
The ceremony for new Swiss Guards was due to take place in May, but it was moved to October due to the coronavirus restrictions.
The event was also held behind closed doors, in accordance with current protection regulations.
Pope Francis met with the guards and their parents before the Sunday ceremony and thanked them for choosing to dedicate “a period of their youth in the service of the Successor of Peter”.

In the audience on Oct. 2, he told the new recruits that “the time you will spend here is a unique moment in your life.”
“May you live it in a spirit of fraternity, helping one another to lead a meaningful and joyfully Christian life,” the pope said.
The pontiff also emphasized the crucial role of the family in the transmission of faith.
“The presence of your family members expresses the devotion of Swiss Catholics to the Holy See, as well as the moral education and good example by which parents have passed on to their children the Christian faith and the sense of generous service to their neighbor,” he said.
Established in 1506, the duty of the world’s smallest but oldest standing arm is to protect the Vatican, Apostolic Palace and the pope.
Members of the Swiss Guard must be Swiss, Catholic and top-notch soldiers. They are also famous for their antique blue, red and yellow striped uniforms.
FULL TEXT Release: CBCP News - Image Source: Screen Shot Veritas846.ph
Posted by Jesus Caritas Est at 11:32 AM