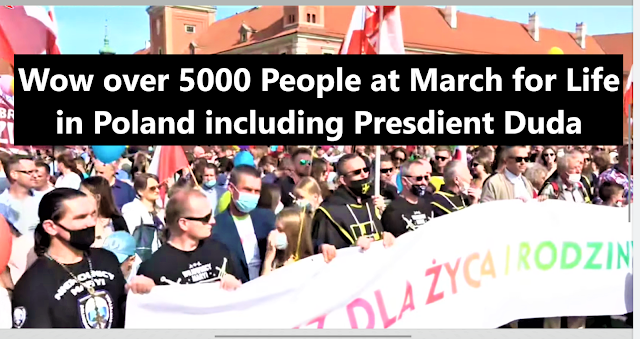 Over 5,000 people at the March for Life and Family 2020. Among the participants, President Andrzej Duda

The 15th March for Life and Family took place in Warsaw, the participants of which affirmed the right to life and pro-family values. They also emphasized the need to defend the family against numerous ideological threats. The event was attended by the President of Poland, Andrzej Duda, who accepted the organizers' invitation.

"Let's defend the family together" - this is the slogan of this year's March for Life and Family, which passed through the streets of the Polish capital. The event gathered many Warsaw residents, but also people from various cities from all over Poland, who decided to publicly demonstrate their attachment to the natural law, the right to life from conception, and together defend the family against attacks. The Sunday March for Life and Family was special due to the presence of President Andrzej Duda, who took part in this pro-family demonstration.

The atmosphere of this year's March for Life and Family resembled the one known from previous years. However, the organizers emphasize that this year's demonstration had two dimensions. The first is a positive affirmation of Christian values, the natural social order, and the need to increase the protection of the right to life from conception. It was pointed out that on October 22, the Constitutional Tribunal would deal with the constitutionality of the so-called a premise of eugenics, thanks to which, statistically, nearly 1000 abortions are performed annually.

The second important dimension of the March was, as indicated by the organizers, the need to defend the family against ideological threats. - The greatest battle of the 21st century will be for the family. Already today we observe extremely radical actions of left-wing activists, who more and more often speak directly or in a slightly veiled way about the necessity to destroy the family - points out Paweł Ozdoba.

The president of the Center for Life and Family adds that today, despite the fact that the family is the foundation of our society and civilization, it is more and more often contested and attacked by radical leftist ideologies. - Marriage as a union between a man and a woman is undermined, the right of parents to raise children in accordance with their own beliefs and the ideological constructs of the so-called gender. The natural order and Christian values ​​are threatened today by radical ideologues, he emphasizes.

The organizer of the event was the Life and Family Center. The demonstration was attended, among others, by Barbara Nowak, the curator of education in Małopolska, and also Fr Tomasz Kancelarczyk and Fr. Dominik Chmielewski. March for Life and Family was supported by well-known journalists, incl. Paweł Lisicki, Grzegorz Górny, satirist Jerzy Skoczylas and actor Dariusz Kowalski.