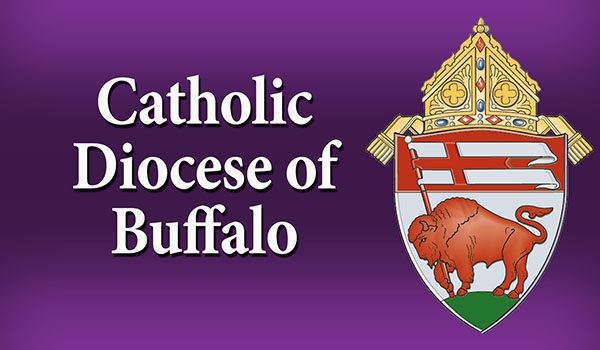 Statement of the Diocese of Buffalo on the Lawsuit announced by the Attorney General
Mon, Nov 23rd 2020 04:00 pm

We will be reviewing this lawsuit just announced (see below) by the New York Attorney General and weighing the Diocese’s response. In the meantime, we wish to reiterate that there is zero tolerance for sexual abuse of a minor or of sexual harassment of an adult in the Diocese of Buffalo by any member of the clergy, employee or volunteer. The Diocese has put in place rigorous policies and protocols governing required behavior as well as a code of conduct which all clergy are expected to abide by. Moreover, the Diocese has committed to full cooperation with all civil authorities in both the reporting and investigation of alleged crimes and complaints.

BUFFALO – New York Attorney General Letitia James today filed a lawsuit against the Roman Catholic Diocese of Buffalo and former senior leaders, Bishop Emeritus Richard J. Malone and former Auxiliary Bishop Edward M. Grosz, for failing to follow mandated policies and procedures that would help to prevent the rampant sexual abuse of minors by priests within the Catholic Church. The Office of the Attorney General’s (OAG) two year-long investigation into the sexual abuse of children and vulnerable adults within the New York dioceses of the Catholic Church found that allegations of improper sexual conduct against diocesan priests in Buffalo were inadequately investigated, if at all, and were covered-up for years. Even though the diocese’s leadership found sexual abuse complaints to be credible, they sheltered the accused priests from public disclosure by deeming them as “unassignable,” and permitted them to retire or go on purported medical leave, rather than face referral to the Vatican for possible removal from the priesthood.

“When trust is broken with spiritual leaders, it can lead to a crisis of faith. For years, the Diocese of Buffalo and its leadership failed to protect children from sexual abuse,” said Attorney General James. “Instead, they chose to protect the very priests who were credibly accused of these atrocious acts. Individuals who are victims of abuse deserve to have their claims timely investigated and determined, and the Buffalo Diocese refused to give them that chance. While we will never be able to undo the wrongs of the past, I can guarantee that my office will do everything in its power to ensure trust, transparency, and accountability moving forward.”

In 2002, following media reports of widespread sexual abuse of minors by priests, the United States Conference of Bishops adopted specific policies and procedures that required dioceses to conduct proper investigations, and take swift and immediate action on those investigations. Both Bishop Malone and Auxiliary Bishop Grosz personally voted for adoption of these policies, and the Diocese of Buffalo had publicly announced that, beginning in 2002, it complied with them. During its investigation, OAG found that the Buffalo Diocese, Bishop Malone, and Auxiliary Bishop Grosz failed to comply with the measures by refusing to take substantive action when faced with claims of sexual abuse within the diocese. The diocese has recently and publicly admitted that it found substantiated allegations of improper sexual conduct against 78 diocesan priests.

Attorney General James’ civil complaint alleges that, contrary to the diocese’s governing policies and the diocese’s public statements concerning its stance on sexual abuse by priests, more than two dozen of the identified priests were not referred to the Vatican for potential removal from the priesthood — an action that only the Vatican is authorized to approve. Instead, diocese leadership granted the priests protection from public disclosure, resulting in the misuse or waste of charitable assets by supporting priests whom the diocese considered to have committed sexual abuse, and a failure to provide victims with public vindication of their claims.

The suit, filed in the New York County Supreme Court, applies New York’s civil laws governing nonprofit charitable corporations, religious corporations, and charitable assets to address the failed institutional and individual responses to the decades-long crisis of clergy sexual abuse. Under New York law, the Diocese of Buffalo and its leaders have a responsibility to discharge their duties in good faith and with the care a prudent person would use, including their duty to comply with the procedures they have publicly adopted to respond to victims and address the conduct of their employees.

The complaint illustrates these unlawful acts, in part, through a detailed examination of personnel histories for 25 priests in the diocese who were accused of abuse. After extensive delays, most were ultimately removed from ministry, but were not timely referred to the Vatican for a trial and potential removal from the priesthood.

The complaint seeks an order requiring compliance with the mandatory policies and procedures by the diocese and defendant Bishop Edward B. Scharfenberger, who, as Apostolic Administrator for the Diocese of Buffalo, serves as the interim leader of the diocese. The OAG is also seeking the appointment of an independent compliance auditor to monitor and review the diocese’s compliance with sexual abuse policies and procedures. The claims against Bishop Malone and Auxiliary Bishop Grosz, who resigned from the diocese during the duration of the OAG investigation, seek restitution and a bar on future service in a secular fiduciary role in a nonprofit or charitable organization operating in New York.

In addition to today’s suit, Attorney General James filed a motion to allow for the disclosure of the accused priests’ names and alleged conduct outlined in the complaint.

The OAG’s extensive investigation into the sexual abuse of children within the New York dioceses of the Catholic Church began in September 2018, following reports of priests accused of sexual abuse who had been based in New York. OAG issued subpoenas to the Diocese of Buffalo in addition to seven other dioceses in New York. The OAG’s investigation into other New York dioceses is ongoing.

This case is being handled by Assistant Attorneys General Daniel Roque, Catherine Suvari, Steven Shiffman, Jonathan Conley, and Diane Hertz, with the assistance of Legal Assistants Jacqueline Sanchez and Nina Sargent, all under the supervision of Charities Bureau Chief James G. Sheehan and Enforcement Section Co-Chief Emily Stern. The Charities Bureau is part of the Division of Social Justice, led by Chief Deputy Attorney General Meghan Faux, and all under the oversight of First Deputy Attorney General Jennifer Levy.