Catholic Teenager Beatified who was Martyred while Protecting the Eucharist in Spain - Bl. John Roig who Said "God is with me" 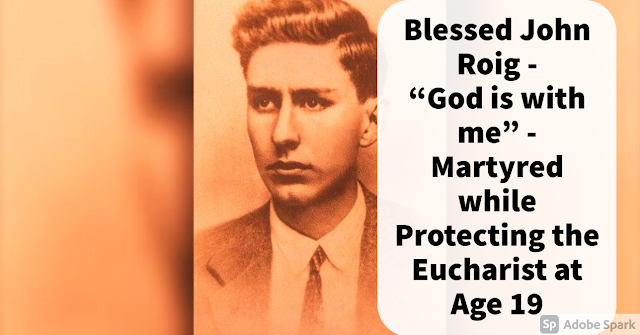 Joan Roig y Diggle, killed "in odium fidei" during the Spanish Civil War, was raised to the honours of the altar on Saturday. The Mass for the Beatification was celebrated by Cardinal Juan José Omella y Omella, Archbishop of Barcelona, who called the 19-year-old martyr "a witness of tenderness." (VaticanNews) This was during a period in Spanish history when the Church and her leaders were persecuted.

Juan Roig y Diggle was born on May 12, 1917 in Barcelona (Spain). Due to economic problems, in 1934, together with his family, he had to move to Masnou where, in addition to working to contribute to the family budget, he joined the Federación de Jóvenes Cristianos de Cataluña (a youth group), of which he became director.

Despite the many commitments of work and study and poor health, he maintained an intense spiritual life: daily participation in the Holy Mass, meditation and practices of piety, the deepening of the social doctrine of the Church.

The companions and priests who knew him in those years recall a young man of singular virtues and great interior transparency, with an intense and delicate spiritual life and a clear awareness of social problems and the responsibility of the laity in the life of society.

During the religious persecution of July 1936, the meeting room of the Federación de Jóvenes Cristianos was destroyed and the church was set on fire. On the night between 11 and 12 September, some militiamen took the Servant of God from his home and, a few hours later, shot him in the vicinity of the cemetery of Santa Coloma de Gramanet (Spain).Juan Roig y Diggle was born on May 12, 1917 in Barcelona (Spain).

On the night of September 11, 1936 , when the militiamen knocked on the door of the 19-year-old John; he consumed the Eucharist he had with him. As he had distributed Communion to those in his community. The last words to his English mother,  were "God is with me", with a smile on his face.