INTERVIEW with Dr. Gavin Ashenden, Former Chaplain to the Queen and Catholic Convert - On the Eucharist and Prayer that Led Him to the Catholic Church! 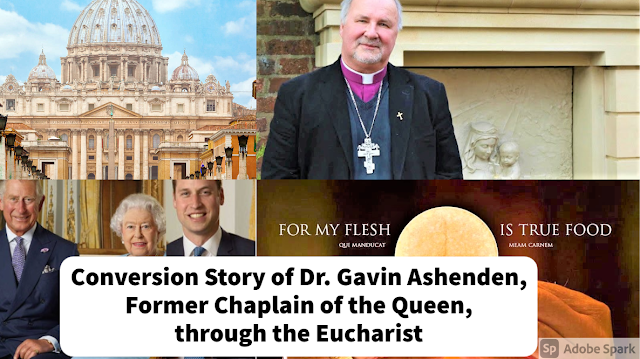 In an Exclusive Interview with Dr. Gavin Ashenden, Former Chaplain to the Queen and Catholic Convert he explains how the Eucharist and Prayer Led Him to the Catholic Church! WATCH the Full Interview below:  The reason for his conversion is that Holy Spirit allowed him to see the 2 of the most important aspects of the faith :  the reality of the Mass and the role that Our Lady Mary plays .

He eventually became a Protestant  bishop and had sung in choirs as a child.

Dr. Ashenden explains conversion is not just an intellectual process.

He was a long time parish priest in London and has  4 academic degrees; eventually becoming a professor at a university.

Dr. Ashenden explains he was attacked by the devil and tried to rationalize it. Rev. Gavin asked an exorcist and he said you must pray the rosary.  I wasn't sure that this was the proper way to realate to God  and his mother. But he tried it and says "I was astonished at the power of the rosary and it's power..." He also began to discover  evidence for Eucharist miracles and particularly the one in Buenos Aires. (approved by Pope Francis) He then discovered the scientic evidence for them which propelled him to become a Catholic. Dr. Gavin expressed his joy in coming home to the Catholic Church. "I don't know why it took me so long"  He was honored to serve as one of the Queen's chaplains for 8-10 years.