Latest Appointments during the USCCB General Assembly - Summary with FULL Video - Archbishop Lori says "...all bishops should spend at least an hour a day in prayer and commit to regular fasting and penance." 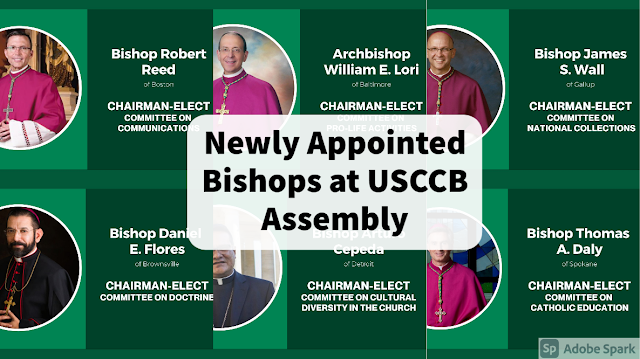 Archbishop Gomez recognized the bishops who have passed away since the last bishops meeting. "Eternal rest grant unto them, O Lord, and let perpetual light shine upon them. Amen"


Msgr. Brian Bransfield, who is the outgoing General Secretary, went over a few housekeeping items for bishops to speak on the floor.
"At the core of Christian faith, witnessed in the lives of many saints, including that of Mother Teresa, is our response of love toward the least of our brothers and sisters," said +Nuncio Archbishop Christophe Pierre.  "As bishops, we have a special responsibility to lead by example, demonstrating what it means to be a neighbor." +Pierre
On the McCarrick report, Archbishop Gomez said, "We apologize for those who commit individually and collectively."
Bishop Michael Olson, said the bishops need to be accountable to the faithful and answer questions that this report raises.
Archbishop Lori, reiterated that all bishops should spend at least an hour a day in prayer and commit to regular fasting and penance.