Saint November 18 : St. Rose Philippine Duchesne - Known by Natives as "Woman-Who-Prays-Always" - Nun of the Society of the Sacred Heart of Jesus 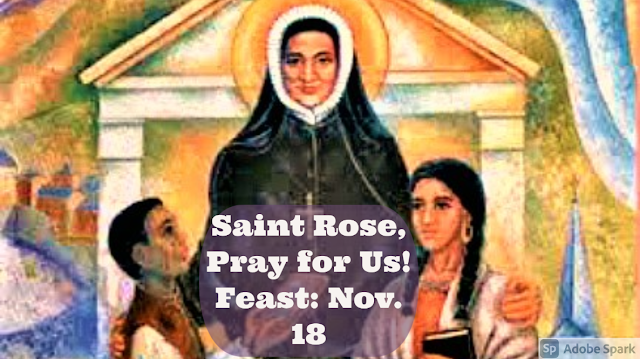 religious, of the Society of the Sacred Heart of Jesus

ROSE PHILIPPINE DUCHESNE Was born August 29, 1769 in Grenoble, France. She was baptized in the Church of St. Louis and received the name of Philip, the apostle, and Rose of Lima, first saint of the new continent. She was educated at the Convent of the Visitation of Ste. Marie d'en Haut, then, drawn to the contemplative life, she became a novice there when she was 18 years old.

At the time of the Revolution in France, the community was dispersed and Philippine returned to her family home, spending her time nursing prisoners and helping others who suffered. After the Concordat of 1801, she tried with some companions to reconstruct the monastery of Ste. Marie but without success.

In 1804, Philippine learned of a new congregation, the Society of the Sacred Heart of Jesus, and offered herself and the monastery to the Foundress, Mother Madeleine Sophie Barat. Mother Barat visited Ste. Marie in 1804 and received Philippine and several companions as novices in the Society.

Even as Philippine's desire deepened for the contemplative life, so too her call to the missions became more urgent - a call she had heard since her youth. In a letter she wrote to Mother Barat, she confided a spiritual experience she had had during a night of adoration before the Eucharist on Holy Thursday: "I spent the entire night in the new World ... carrying the Blessed Sacrament to all parts of the land ... I had all my sacrifices to offer: a mother, sisters, family, my mountain! When you say to me 'now I send you', I will respond quickly 'I go"'. She waited, however, another 12 years.

In 1818 Philippine's dream was realized. She was sent to respond to the bishop of the Louisiana territory, who was looking for a congregation of educators to help him evangelize the Indian and French children of his diocese. At St. Charles, near St. Louis, Missouri, she founded the first house of the Society outside France. It was in a log cabin - and with it came all the austerities of frontier life: extreme cold, hard work, lack of funds. She also had difficulty learning English. Communication at best was slow; news often did not arrive from her beloved France. She struggled to remain closely united with the Society in France.

Philippine and four other Religious of the Sacred Heart forged ahead. In 1818 she opened the first free school west of the Mississippi. By 1828 she had founded six houses. These schools were for the young women of Missouri and Louisiana. She loved and served them well, but always in her heart she yearned to serve the American Indians. When she was 72 and no longer superior, a school for the Potawatomi was opened at Sugar Creek, Kansas. Though many thought Philippine was too sick to go, the Jesuit head of the mission insisted: "She must come; she may not be able to do much work, but she will assure success to the mission by praying for us. Her very presence will draw down all manner of heavenly favors on the work".

She was with the Potawatomi but a year; however, her pioneer courage did not weaken, and her long hours of contemplation impelled the Indians to name her, Quah-kah-ka-num-ad,
"Woman-Who-Prays-Always". But Philippine's health could not sustain the regime of village life. In July 1842, she returned to St. Charles, although her heart never lost its desire for the missions: "I feel the same longing for the Rocky Mountain missions and any others like them, that I experienced in France when I first begged to come to America...".