Saint November 22 : St. Cecilia a Martyr who Died in 117 AD and the Patron of Church Musicians whose Body was found Incorrupt 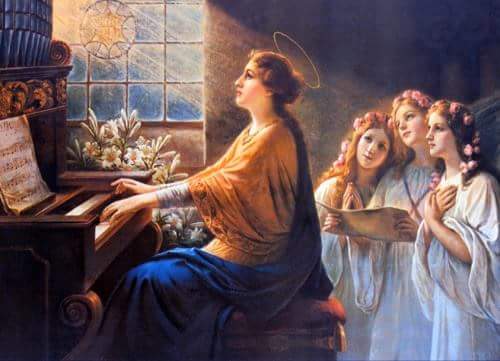 >St. Cecilia
MARTYR, PATRONESS OF CHURCH MUSIC
Born:
Rome
Major Shrine:
Santa Cecilia in Trastevere, Rome, Italy
Patron of:
Church music,great musicians, poets
Glorious saint, who chose to die
Instead of denying your King. We pray you please to help us As His fair praise we sing!
We lift our hearts in joyous song To honor Him this way, And while we sing, remembering, To sing is to doubly pray.
At once in our hearts and in our tongues
We offer double prayer Sent heavenward on winged notes
To praise God dwelling there.
While in our hearts and tongues we try
With song to praise God twice, We ask dear saint, to help us be United closed to Christ!
On, November 22, we celebrate the feast day of Saint Cecilia (died 117), Virgin and Martyr of the Church. Saint Cecilia is one of the most famous of the Roman martyrs, but the facts of her life have been mostly lost to history. Instead, the Holy Legend of Saint Cecilia has been celebrated since the late fourth century. Saint Cecilia further has the distinction of being the patron saint of music—especially the music used during the celebration of Mass—and the patron saint of musicians, composers, instrument makers, and poets. This association grew from her constant song of Christian love in her heart, present throughout her life. From her Acta: “While the profane music of her wedding was heard, Cecilia was singing in her heart a hymn of love for Jesus, her true spouse.”
Cecilia was born in the early part of the third century, in Rome. Born to wealthy, pagan parents, she was likely instructed in the Catholic faith by kind relatives or a nurse. As a noble family—known for their bravery and intelligence—her parents were likely to have accepted (although possibly not approved) of her Catholic faith. By all reports, even as a child, Cecilia loved music, and she would spend her days singing the praises of God, accompanying herself on various instruments.
SEE ALSO: