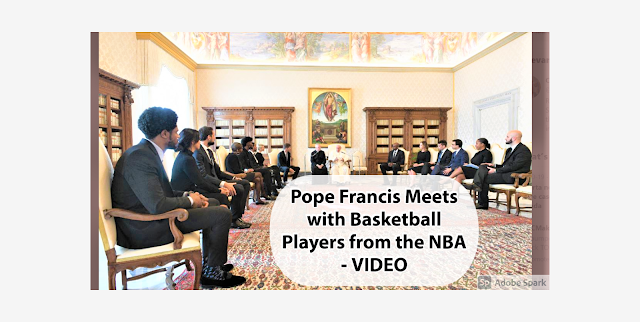 The Vatican website reported that Pope Francis met with a delegation from the National Basketball Players Association in the library of the Apostolic Palace at the Vatican.
The five star players present were, Kyle Korver, Marco Belinelli, Sterling Brown, Anthony Tolliver and Jonathan Isaac.
They discussed their different social projects with the Holy Father.
“We all have so many things that are wrong with us and that are wrong with our society, and we see it and we know it.” Pope Francis expressed his thanks to them for using basketball as a means to help social problems. He also thanked them for setting an example of teamwork.
Pope Francis said, “The beauty of athletes is that they are great, but to be part of a team, they always remain humble.”
These athletes brought a gift to the Pope as he accepted this golden Spalding basketball.
“Thank you, thanks so much.”
“Thank you for having us.”
“This is a book put together, you know, by the players association, of mediator things that us players have done to use our voices and to fight for equality, unity, justice.”
Jonathan Isaac gave him an autographed jersey...
“This is on behalf of the Orlando Magic and myself. Just the signed-- my jersey.”
“You?”
“Yes, that's me.”
...and a gift from J.U.M.P Ministries Global Church in Orlando, which the pope blessed.
Edited from ESPN and Romereports