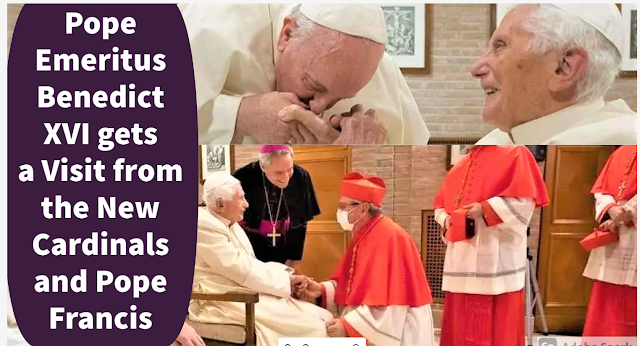 Vatican News reports that Pope Francis and the new Cardinals visited Benedict XVI Pope Emeritus. Benedict XVI, greeted and blessed the new Cardinals whom he met in the chapel of the “Mater Ecclesiae” monastery in the Vatican after the consistory.
The meeting took place after the celebration of Saturday afternoon’s Ordinary Public Consistory, which took place in St. Peter's Basilica, "the Holy Father and the 11 new cardinals present in Rome visited Pope Emeritus, Benedict XVI.” According to a statement released by the Holy See Press Office, the meeting took place in the chapel of the Mater Ecclesiae monastery inside the Vatican "in an atmosphere of affection”, during which the cardinals were introduced individually to the Pope Emeritus. The statement also said that Benedict XVI expressed his joy for the visit and, after the recitation of the “Salve Regina” blessed them. In keeping with tradition The visit to the Mater Ecclesiae monastery in the Vatican has become a consolidated tradition since the Consistory of 2016. On the first two occasions in 2014 and 2015, the Pope Emeritus took part in the celebration in St. Peter's Basilica.
Edited from Vatican News