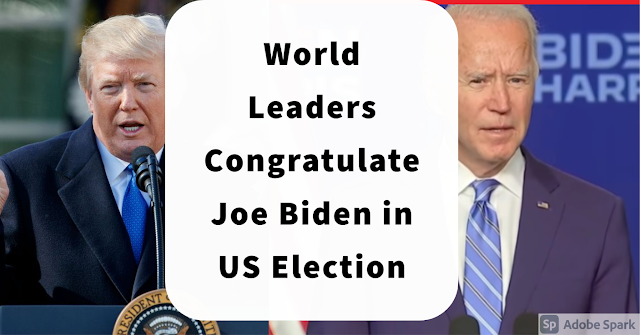 Democrat and former Vice President, Joe Biden has claimed victory in the US election.   Biden has won enough electoral votes to win the US presidential election, according to polls. Incumbent President Donald Trump disputes the results. (Update: Please note that this post is not a declaration of the winner only a report of what the world leaders wrote; as of yet the official winner is still disputed by the incumbent President)
World leaders have been congratulating, Joe Biden who seems to have secured a win in the US presidential race.
Emmanuel Macron, President of France wrote:


The Americans have chosen their President. Congratulations @JoeBiden and @KamalaHarris! We have a lot to do to overcome today’s challenges. Let's work together!

Congratulations, @JoeBiden and @KamalaHarris. Our two countries are close friends, partners, and allies. We share a relationship that’s unique on the world stage. I’m really looking forward to working together and building on that with you both.

If the results are confirmed, Biden will become the 46th President of the United States of America.
Boris Johnson, Prime Minister of the United Kingdom wrote:

"Congratulations to Joe Biden on his election as President of the United States and to Kamala Harris on her historic achievement."

"The US is our important ally and I look forward to working closely together on our shared priorities, from climate change to trade and security."

The media polls on Saturday, November 7, 2020, showed Biden surpassing 270 Electoral College votes with a win in Pennsylvania, with victories in swing states Michigan and Wisconsin. The election results counting has been going on for over three days. Election results also show Biden won the national popular vote. Incumbent President Donald Trump has vowed to challenge the election results in court, saying “this election is far from over."  The official counting of votes is still continuing. Joe Biden was born in Scranton, Pennsylvania, and raised in Delaware. He was Barack Obama’s vice president in 2008.