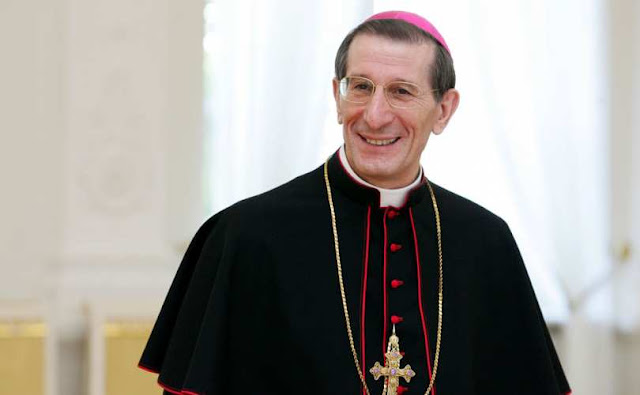 Archbishop Bonazzi was born in Gazzaniga, Italy, on 19 June 1948, and was ordained a priest on 30 June 1973 for the Diocese of Bergamo. Having obtained a Doctorate in Education, he entered the diplomatic service of the Holy See on 25 March 1980. He previously served in the diplomatic missions of the Holy See in Cameroon, Trinidad and Tobago, Malta, Mozambique, Spain, the U.S.A., and Italy, as well in Canada. On 19 June 1999, Archbishop Bonazzi was appointed Apostolic Nuncio to Haiti, following which he was named Apostolic Nuncio to Cuba on 30 March 2004, and then Apostolic Nuncio to Lithuania and Estonia, as of 14 March 2009, and to Latvia, as of 25 March 2009.

The appointment of the Apostolic Nuncio to Canada to replace Archbishop Bonazzi has not yet been announced.

Source: CCCB ( A video of the Nuncio at his Celebration for Pope Francis)