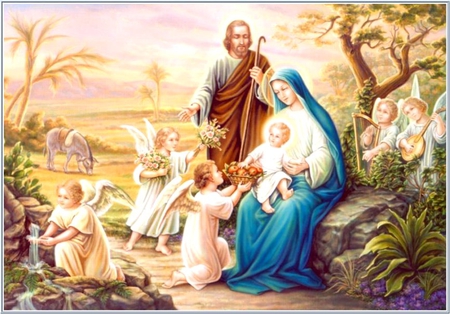 
Alleluia
JN 1:14A, 12A
R. Alleluia, alleluia.
The Word of God became flesh and dwelt among us.
To those who accepted him
he gave power to become the children of God.
R. Alleluia, alleluia.
Gospel
JN 1:1-18
In the beginning was the Word,
and the Word was with God,
and the Word was God.
He was in the beginning with God.
All things came to be through him,
and without him nothing came to be.
What came to be through him was life,
and this life was the light of the human race;
the light shines in the darkness,
and the darkness has not overcome it.
A man named John was sent from God.
He came for testimony, to testify to the light,
so that all might believe through him.
He was not the light,
but came to testify to the light.
The true light, which enlightens everyone, was coming into the world.
He was in the world,
and the world came to be through him,
but the world did not know him.
He came to what was his own,
but his own people did not accept him.
But to those who did accept him
he gave power to become children of God,
to those who believe in his name,
who were born not by natural generation
nor by human choice nor by a man’s decision
but of God.
And the Word became flesh
and made his dwelling among us,
and we saw his glory,
the glory as of the Father’s only-begotten Son,
full of grace and truth.
John testified to him and cried out, saying,
“This was he of whom I said,
‘The one who is coming after me ranks ahead of me
because he existed before me.’”
From his fullness we have all received,
grace in place of grace,
because while the law was given through Moses,
grace and truth came through Jesus Christ.
No one has ever seen God.
The only-begotten Son, God, who is at the Father’s side,
has revealed him.
Prayer to Make a Spiritual Communion-
People who cannot communicate now make spiritual communionAt your feet, O my Jesus I bow down and offer you the repentance of my contrite heart, which abysses itself into its nothingness and Your holy presence. I adore you in the Sacrament of Your love, the ineffable Eucharist. I wish to receive you in the poor home that my heart offers you. In anticipation of the happiness of sacramental communion, I want to possess you in spirit. Come to me, oh my Jesus, that I may come to you. May Your love inflame my whole being, for life and death. I believe in you, I hope in you, I love you. So be it. Amen