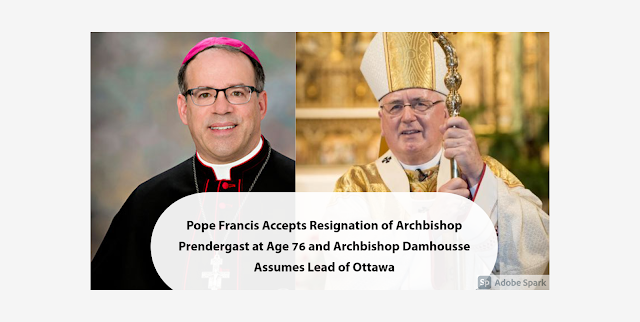 The Vatican released the resignation and succession of the Metropolitan Archbishop of Ottawa-Cornwall (Canada) The Holy Father has accepted the resignation from the pastoral care of the Metropolitan Archdiocese of Ottawa-Cornwall (Canada), presented by His Excellency Monsignor Terrence Thomas Prendergast, SI. He is succeeded by His Excellency Most Reverend Monsignor Marcel Damphousse, currently Coadjutor Archbishop of the same Archdiocese.
Archdiocese Ottawa-Cornwall reported the Change in Church Leadership in Ottawa-Cornwall in December.
Archbishop Terrence Prendergast, S.J., is celebrated his Silver Jubilee as a bishop at a Mass of
Thanksgiving on December 3 at Notre Dame Cathedral and will transition to the role of ArchbishopEmeritus. (Full Video below:)
Archbishop Marcel Damphousse is his successor, as was established when he was named
CoAdjutor Archbishop on May 6 when the Archdiocese of Ottawa-Cornwall was established.
Archbishop Prendergast, who has headed the Archdiocese of Ottawa since 2007, is 76, a year older than
when he turned in his retirement notice to the pope as required by canon law. Pope Francis accepted
the document “Nunc pro tunc,”—“Now for then”—allowing His Grace to celebrate 25 years of episcopal
service. Archbishop Damphousse, 57, had been Bishop of Sault-Sainte-Marie since 2015 and Bishop of
Alexandria-Cornwall from 2012 to 2015.
“I am honoured to have served as leader of the Archdioceses of Ottawa and Ottawa-Cornwall for 13
years,” Archbishop Prendergast said.
“This large and generous community of faithful Catholics will continue to encourage me in my faith
journey,” he said. His Silver Jubilee Mass of Thanksgiving will take place on December 3, the feast day of
Saint Francis Xavier, one of the founders of the Jesuit Order to which the outgoing Archbishop belongs.
Archbishop Prendergast leaves a considerable legacy of accomplishments in the Archdiocese. He is a
staunch supporter of the Pro-life movement, publicly opposing euthanasia and defending the life of the
unborn. He has made the Church present to people at public events, greeting parishioners after every
Mass and appearing at conferences locally and across the country. He encouraged Communion and
Liberation to institute the Way of the Cross on Good Friday in the streets of Ottawa, as they had in
Halifax. He was a columnist in the Catholic Register, the Ottawa Citizen, and the Ottawa Sun. He
pioneered social media—blogging, Facebook, Twitter and Instagram and has appeared on YouTube—to
reach a new generation. He published the Catholic Ottawa newsletter for several years. His Grace
boosted several Catholic ministries with the annual Charity Dinner that he instituted in 2008. His ardent
desire to spread the Gospel led him to collaborate closely with NET Canada and Catholic Christian
Outreach, two bodies that are engaged in sharing the gospel with youth, on college and university
campuses and beyond. He supported the development of the New Evangelization Summit, a yearly
festival to explore how to reach out to those who have left practice of the faith or who have never heard
it. He has nurtured new religious communities based in the Archdiocese: the Queenship of Mary and the
Servants of the Cross. His heart for First Nations Peoples inspired his unwavering encouragement of
Kateri Native Ministry and the Truth and Reconciliation Commission process. He has dedicated
considerable resources to catechise youth in the French Catholic school boards of the Archdiocese.
Archbishop Prendergast has come alongside promising initiatives in the francophone community, like le
Festival de la Parole and Foi et télévision chrétienne, as well as ministries with a history of faithful
service, like les Sœurs de la charité d’Ottawa and les Filles de la sagesse.
A defender of Christian unity, Archbishop Prendergast was educated at, and has taught Scripture in,
ecumenical theological centres and as a priest and bishop served on the Anglican-Roman Catholic
Dialogue. He was one of the first bishops to welcome into the Catholic Communion members of an
Anglican Rite parish on April 15, 2012, as provided for by Pope Benedict three years before. He also
cherishes his association with local interfaith bodies and his friendship with leading members of the
Jewish and Islamic communities.
He said he knows Archbishop Damphousse “will cherish his episcopal ministry in Ottawa-Cornwall,” and
with him as the archdiocese’s new shepherd, Archbishop Prendergast said he is “confident that God’s
universal Church in Ottawa-Cornwall is in good hands.”
The new archbishop’s ministry will be inaugurated during a Mass at Notre Dame Cathedral Basilica on
December 8, the Feast of the Immaculate Conception of the Blessed Virgin Mary. This feast day is of
significance to both the former Diocese of Alexandria-Cornwall, Archbishop Damphousse’s first
episcopal appointment, and to the former Archdiocese of Ottawa.
Archbishop Damphousse called it “a joy and a privilege to be called to serve as the second Archbishop of
Ottawa-Cornwall.”
Archbishop Prendergast, whose career includes work as a professor, a prolific writer, and twice a
university Chancellor, intends to remain active as Archbishop Emeritus through pastoral ministry and as
an author.
Source: Press Release Archdiocese Ottawa-Cornwall and Vatican