Saint December 11 : St. Eulalia of Mérida a Virgin and Martyr of Spain - Legend says a Dove Flew out of her Mouth as she Died 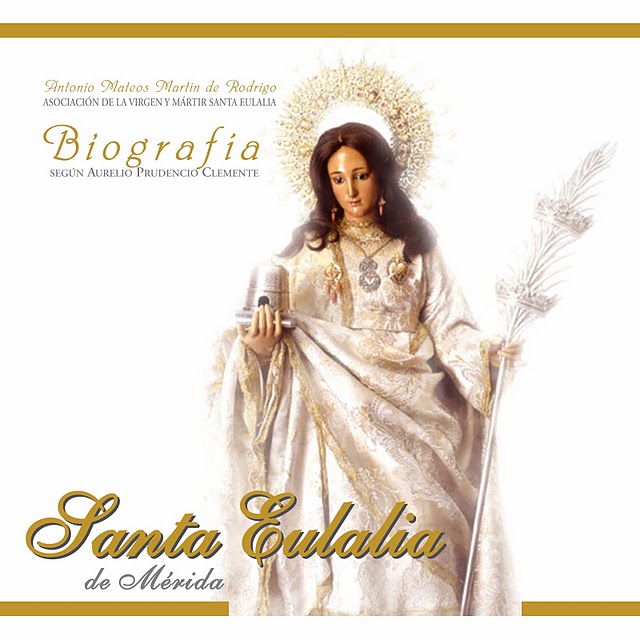 Saint Eulalia of Mérida is the best-known virgin martyr of Spain. She is praised by the Christian poets Prudentius and St Venantius Fortunatus. Praised by two Christian poets Two Christian poets Prudentius (348-413), a Spaniard, and St Venantius Fortunatus (535-605), who lived at Poitiers, France, have written poems about Eulalia. She is also the subject of a sermon by St Augustine and is mentioned in the Calendar of Carthage and Martyrology of Jerome. Prudentius’s account presents her as a consecrated virgin of noble family, who despised frivolity and luxury and showed austerity and strictness worthy of an older person.
Eulalia’s story
The 7th century Acta present Eulalia as a girl of twelve, who was hidden by her mother in the countryside when the edict of Diocletian demanded that everyone sacrifice to the Roman gods (in AD 304). Eulalia, however, ran to the law court of the governor Dacian at Merida, professed herself a Christian, insulted the pagan gods and emperor Maximian, and challenged the authorities to martyr her. The judge’s attempts at flattery and bribery failed.
Prudentius says that for her:
Isis Apollo Venus nihil est,
Maximianus et ipse nihil:
illa nihil, quia factu manu;
hic, manuum quia facta colit.
(Isis, Apollo and Venus are nothing,
Even Maximian himself is nothing;
They are nothing because they are made by hand,
He, for he worships things made by hands).
She was then stripped by the soldiers, tortured with hooks and torches, and burnt at the stake, suffocating from smoke inhalation. She taunted her torturers all the while, and as she died a dove flew out of her mouth. This frightened away the soldiers and allowed a miraculous snow to cover her nakedness, its whiteness indicating her sainthood. A shrine over her tomb was soon erected. Her veneration Veneration of Eulalia was already popular with Christians by AD 350; relics from her were distributed through Iberia. Bishop Fidelis of Merida rebuilt a basilica in her honour around 560 AD. Her shrine was the most popular in Visigothic Spain. In 780 her body was transferred to Oviedo by King Silo. It lies in a coffin of Arab silver donated by Afonso VI in 1075. In 1639, she was made patron saint of Oviedo. Edited from Catholic Ireland.net