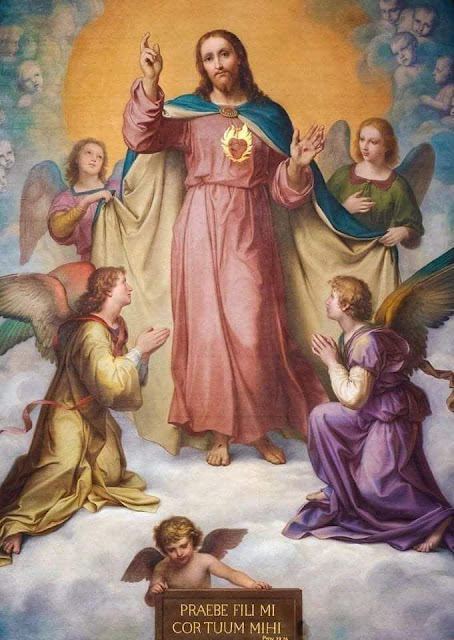 Memorial of Saint Ignatius of Loyola, Priest
Lectionary: 405
Reading 1JER 26:1-9
In the beginning of the reign of Jehoiakim,
son of Josiah, king of Judah,
this message came from the LORD:
Thus says the LORD:
Stand in the court of the house of the LORD
and speak to the people of all the cities of Judah
who come to worship in the house of the LORD;
whatever I command you, tell them, and omit nothing.
Perhaps they will listen and turn back,
each from his evil way,
so that I may repent of the evil I have planned to inflict upon them
for their evil deeds.
Say to them:  Thus says the LORD:
If you disobey me,
not living according to the law I placed before you
and not listening to the words of my servants the prophets,
whom I send you constantly though you do not obey them,
I will treat this house like Shiloh,
and make this the city to which all the nations of the earth
shall refer when cursing another.

GospelMT 13:54-58
Jesus came to his native place and taught the people in their synagogue.
They were astonished and said,
“Where did this man get such wisdom and mighty deeds?
Is he not the carpenter’s son?
Is not his mother named Mary
and his brothers James, Joseph, Simon, and Judas?
Are not his sisters all with us?
Where did this man get all this?”
And they took offense at him.
But Jesus said to them,
“A prophet is not without honor except in his native place
and in his own house.”
And he did not work many mighty deeds there
because of their lack of faith.

Prayer to make Spiritual Communion:
People who cannot communicate now make spiritual communion.At your feet, O my Jesus I bow down and offer you the repentance of my contrite heart, which abysses itself into its nothingness and Your holy presence. I adore you in the Sacrament of Your love, the ineffable Eucharist. I wish to receive you in the poor home that my heart offers you. In anticipation of the happiness of sacramental communion, I want to possess you in spirit. Come to me, oh my Jesus, that I may come to you. May Your love inflame my whole being, for life and death. I believe in you, I hope in you, I love you. So be it. Amen
Posted by Jesus Caritas Est at 10:54 PM No comments:

Saint July 31 : St. Ignatius of Loyola the Founder of the Jesuits and Patron of Soldiers - #SJ 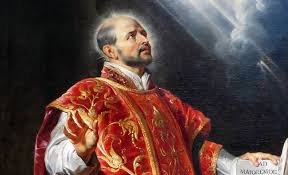 FOUNDER OF THE SOCIETY OF JESUS

December 24, 1491, Loyola (Azpeitia), Basque province of Guipúzcoa, Spain
Died:
July 31, 1556, Rome
Canonized:
March 12, 1622, Rome by Pope Gregory XV
Patron of:
provinces of Vizcaya (Biscay) & Gipuzkoa, Spain, Military Ordinariate of the Philippines, Society of Jesus, soldiers.
Youngest son of Don Beltrán Yañez de Oñez y Loyola and Marina Saenz de Lieona y Balda (the name López de Recalde, though accepted by the Bollandist Father Pien, is a copyist's blunder), b. in 1491 at the castle of Loyola above Azpeitia in Guipuscoa; d. at Rome, 31 July, 1556.
The family arms are: per pale, or, seven bends gules (?vert) for Oñez; argent, pot and chain sable between two grey wolves rampant, for Loyola. The saint was baptized Inigo, after St. Enecus (Innicus), Abbot of Oña: the name Ignatius was assumed in later years, while he was residing in Rome. For the saint's genealogy, see Perez (op. cit. below, 131); Michel (op. cit. below, II, 383); Polanco (Chronicon, I, 51646). For the date of birth cfr. Astráin, I, 3 S.
I. Conversion (1491-1521) At an early age he was made a cleric. We do not know when, or why he was released from clerical obligations. He was brought up in the household of Juan Velásquez de Cuellar, contador mayor to Ferdinand and Isabella, and in his suite probably attended the court from time to time, though not in the royal service. This was perhaps the time of his greatest dissipation and laxity. He was affected and extravagant about his hair and dress, consumed with the desire of winning glory, and would seem to have been sometimes involved in those darker intrigues, for which handsome young courtiers too often think themselves licensed. How far he went on the downward course is still unproved. The balance of evidence tends to show that his own subsequent humble confessions of having been a great sinner should not be treated as pious exaggerations. But we have no details, not even definite charges. In 1517 a change for the better seems to have taken place; Velásquez died and Ignatius took service in the army. The turning-point of his life came in 1521. While the French were besieging the citadel of Pampeluna, a cannon ball, passing between Ignatius' legs, tore open the left calf. and broke the right shin (Whit-Tuesday, 20 May, 1521). With his fall the garrison lost heart and surrendered, but he was well treated by the French and carried on a litter to Loyola, where his leg had to be rebroken and reset, and afterwards a protruding end of the bone was sawn off, and the limb, having been shortened by clumsy setting, was stretched out by weights. All these pains were undergone voluntarily, without uttering a cry or submitting to be bound. But the pain and weakness which followed were so great that the patient began to fail and sink. On the eve of Sts. Peter and Paul, however, a turn for the better took place, and he threw off his fever.