On Holocaust Remembrance Day, Pope Francis says "To remember is a condition for a better future of peace..." FULL TEXT 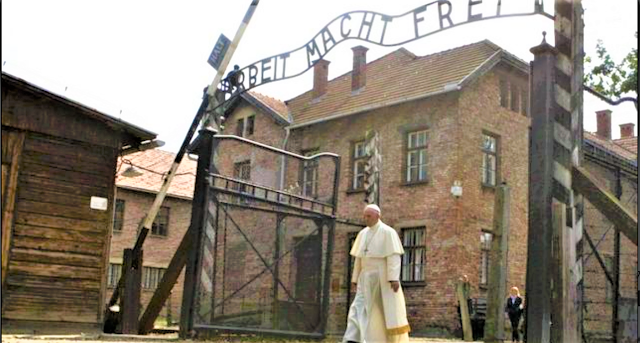 On Holocaust Remembrance Day, Pope Francis says "To remember is a condition for a better future of peace..."
At his General Audience on Wednesday, Pope Francis marked the International Holocaust Remembrance Day,  on the anniversary of the liberation of Nazi concentration and extermination camp at Auschwitz-Birkenau.
FULL TEXT:
Today, the anniversary of the liberation of the Nazi Extermination Camp of Auschwitz, we celebrate International Holocaust Remembrance Day. We commemorate the victims of the Holocaust and all those persecuted and deported by the Nazi regime. Remembrance is an expression of humanity. Remembrance is a sign of civilization. To remember is a condition for a better future of peace and fraternity. Remembrance also means being careful because these things can happen again, starting with ideological proposals that are intended to save a people and end up destroying a people and humanity. Be aware of how this road of death, extermination and brutality began.
***************
Pope Francis visited the Auschwitz-Birkenau Memorial and Museum, during his visit to Poland in 2016. He became the third Pope to visit the site, after Pope St John Paul II and Benedict XVI. He prayed in silence in the cell of St Maximilian Kolbe, who gave his life for a fellow prisoner in the camp; and later met with Auschwitz survivors. (Edited from VaticanNews and Vatican.va)