Saint January 16 : St. Berard of Carbio a Franciscan Friar Minor and of the 1st Martyrs of the Friars in Morocco 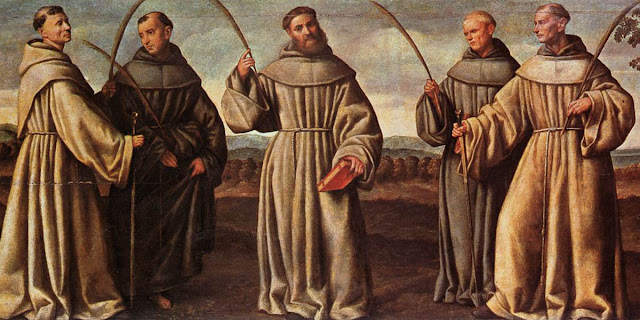 St. Berard of Carbio
FRIAR MINOR AND MARTYR
Born:
Carbio, Umbria, Italy
Died
16 January 1220, Morocco
Canonized:
1481, Rome by Pope Sixtus IV
Of the noble family of Leopardi, and a native of Carbio in Umbria, Berard was received into the Franciscan Order by the Seraphic Patriarch  himself, in 1213. He was well versed in Arabic, an eloquent preacher, and was chosen by St. Francis, together with two other priests, Peter and Otho, and two lay-brothers, Accursius and Adjutus, to evangelize the infidels of the East. On the conclusion of the Second General Chapter in 1219, St. Francis believed that the time had then come for the religious of his order to extend their apostolic labours beyond the Italian peninsula and Northern Europe; and, choosing for himself and twelve other religious the greater part of Syria and Egypt, he allotted to Berard and his companions the missions of Morocco. The five missionaries set sail from Italy, and after sojourning some time in Spain and Portugal finally arrived in the Kingdom of Morocco. Their open preaching of the Gospel there and their bold denunciation of the religion of Mahomet soon caused them to be apprehended and cast into prison. Having vainly endeavoured to persuade them to abandon the true religion, the Moorish king in a fit of rage opened their heads with his scimitar, and thus were offered to God the first fruits of the blood of the Friars Minor. Berard and his companions were canonized by Sixtus V, in 1481. The feast of the martyrs of Morocco is kept in the order on the 16th of January.
SOURCE: Catholic Encyclopedia
Posted by Jesus Caritas Est at 8:38 PM