Wow an Ordination to the Priesthood in a Country where only 1% of the Population is Christian - A Community Rejoices! VIDEO 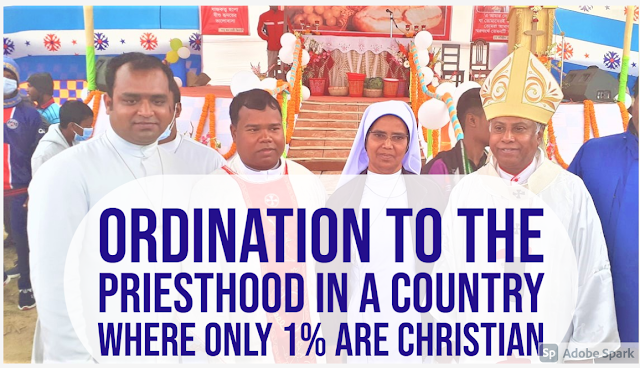 An ordination to the Priesthood in a country where only 1% of the population is Christian brings hope!
by: Francis Rony Tirky for Catholic News World
The Holy Mass for the ordination of Biplob Michael Kujur was offered by Archbishop Bejoy Nicephorus D 'Cruze O.M.I on January 22, 2021. He is the Metropolitan Archbishop of Dhaka, Bangladesh. Bishop Gervas Rozario, the Bishop of Rajshahi Diocese was co-celebrant.
There were more then 35 priests and 50 nuns and 10 deacons, 120 seminaries and 1200 Christians people who joined in the ordination Mass at Christ the King of Peace Catholic Church, in Chandpukur, Naogoan, Rajshahi diocese, Bangladesh.
The newly ordained priest's name is Rev. Fr. Biplob Michael Kujur O.M.I He is a member of the missionary Oblates of Mary Immaculate. His father's name is let. Budhuram Kujur and his mother's name is let. Budhuni Tigga.
Fr. Biplob came from a large family of three brothers and three sisters. He is the fourth child.  Fr. Biplob Michael entered seminary in 2001 and was ordained a deacon on 12/ 07 / 2020.
Bangladesh is a multicultural country where Muslims are the majority in fact, 95% of the people are Muslims.
Watch the Amazing Video from Bangladesh from the Ordination Ceremony and Share to Inspire!:
There are more then 45 indigenous communities living Bangladesh. These indigenous communities are original people of Bangladesh but there have a long history. These minorities communities of people live in remote areas where there is not little communication available. Most of these indigenous communities of people are now living under the poverty line. There are a few international priests and nuns and religious congregations working from the 19th century in educational and charitable activities among them. There are more than five million indigenous people living at Bangladesh but only 0.03 million people are Christian.
There are thus, many opportunities to do apostolic work in Bangladesh. Higher education, and technological education, are especially needed for indigenous communities. However, there are few indigenous boys and girls  coming to join the religious congregations in the priesthood, brotherhood, or religious life. It's slowly increasing day by day. There are some indigenous boys and girls who are now in seminaries of different congregations. So it's seems that we will get more priests and nuns coming in future years.
The newly ordained Rev. Fr.Biplob Michach Kujur ( O M I)  is from the OROUAN indigenous community. There were, thus, a few OROUAN indigenous rituals, during the Mass. The indigenous people received the new priest with a special ceremony. Then they fed him sweets so that the priest can preach the holy Gospel sweetly to the people. At night there was adoration and novena prayers. Before going to offer holy mass there was a procession song and dance.