Chiang Mai: The General Secretaries of the World Council of Churches (WCC) and the Christian Conference of Asia (CCA) have issued a joint pastoral letter addressed to churches and the Council of Churches in Myanmar, following the recent development of the army toppling Myanmar’s elected government, and arresting its de facto leader, Aung San Suu Kyi.

The joint pastoral letter issued by the WCC General Secretary Rev. Prof. Dr Ioan Sauca and the CCA General Secretary Dr Mathews George Chunakara conveyed a message of profound concern on the current developments, “especially the abrupt resumption of military rule, the overturning of the outcome of elections on 8 November 2020, as well as the detention of key political and pro-democracy representatives and the escalation of the national situation which has led to the current declaration of a state of emergency.”

The leaders of global and regional ecumenical organisations in their pastoral letter expressed their hope for peace and justice: “We pray that the recent development will not lead to an escalation of violence and suffering in your country.”

The joint pastoral letter affirms “support for the churches and communities of Myanmar in prayer and solidarity,” as they sought to “provide counsel and comfort for their people in this time of deep anxiety and uncertainty for the future.”

The WCC and CCA voiced their concern regarding the future of the country and its people, stating, “We urge a swift and peaceful return to the path of democracy, and appeal for the human rights and freedoms—including the freedom of religion or belief—of all Myanmar’s people to be fully respected and protected.”

The General Secretary of the CCA, Dr Mathews George Chunakara, said that the military coup comes at a time when the country suffers the worst effects of the COVID-19 pandemic, declining socioeconomic standards, and continued struggles for liberation from rampant poverty.

Recalling the CCA’s consistent efforts over the decades towards enhanced democratisation and human rights in Myanmar, the CCA General Secretary said, “The CCA has always upheld the values of democracy, justice, and peace. At this time of destabilisation and uncertainty about the future, we stand with the people of Myanmar and pray for the restoration of democracy in the country.”

The declaration of a year-long state of emergency and the handing of power over to the commander-in-chief, the deployment of the military on the streets of the capital, Naypyidaw, and in the largest city, Yangon, (where blockades on major roads have been erected) makes Myanmar the location of the latest setback for democracy in Asia.

Myanmar, earlier known as Burma, was under military dictatorship from 1962. The army eventually ended nearly 50 years of military rule in the country in 2011, making way for a civilian government. However, the military still retained a great measure of authority although Suu Kyi’s National League for Democracy was allowed to take power in 2016.

With the recent development, the international community, including the churches around the world, have expressed apprehension about the possibility of Myanmar entering another dark phase in its history.

The full text of the WCC–CCA joint pastoral letter to the churches and council of churches in Myanmar can be found below: 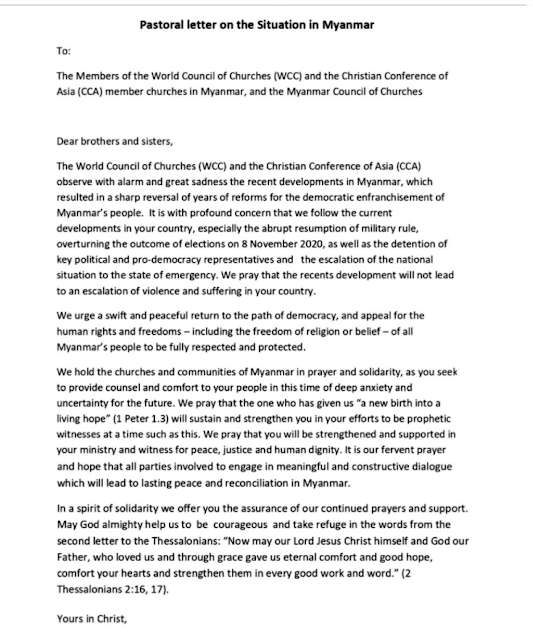