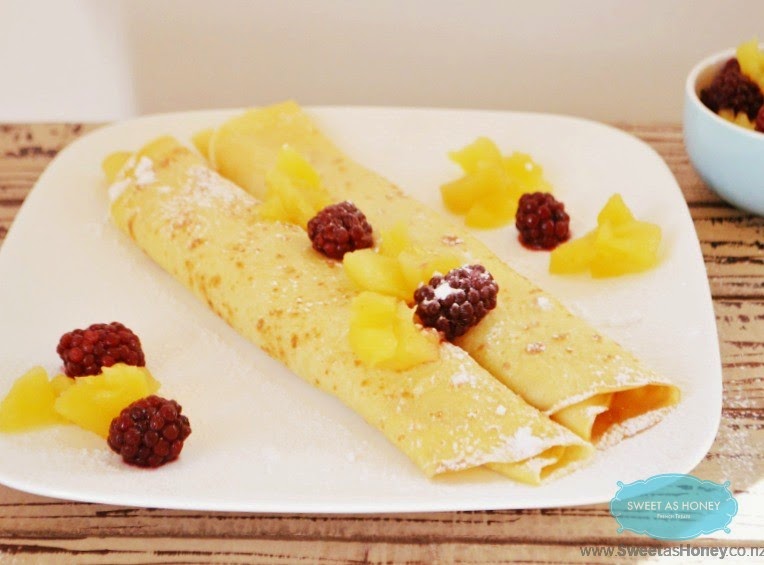 Candlemas Crêpe Recipe (makes about 8 crepes)
1 c. Flour
2 Eggs
1 ¼ c. Milk
2 T. Butter, Melted (unsalted butter can be used for dessert crêpes)
¼ t. Salt for dinner crêpes (only a pinch of salt for dessert crêpes)
1 T. Sugar (for dessert crêpes only)
Butter for cooking
You can either mix all ingredients in a blender, food processor or with a whisk till smooth. It’s best to let the batter sit for ½ hour before cooking. You can add a little more milk or a little water if you find the batter is too thick.
Use a skillet that’s about 6 – 8″ in diameter. (I used an 8″ pan and got 8 fairly large crêpes.) Put about ½ to 1 teaspoon of butter in the bottom of the pan, enough to coat it. Melt on medium high heat. Pour in about 2-3 T. batter and tilt or gently swirl the pan so that the batter covers the whole bottom of the skillet. Cook on one side until golden brown. Flip. Cook the other side till it starts to become golden, which should happen quickly, and remove from heat. Repeat this process until you’ve used all the batter.
Fold the crêpes:
Rolled – Put filling on one end of the crêpe and roll it up, sort of like a candle
Savory Crêpes (or Dinner Crêpes)
Dessert Crêpes (some of these could be good for breakfast too!)