Pope Francis says “Ask Jesus for the gift of mercy” and JPII “wanted the message of God’s merciful love to reach everyone in the world.” on 90th Anniversary of Divine Mercy 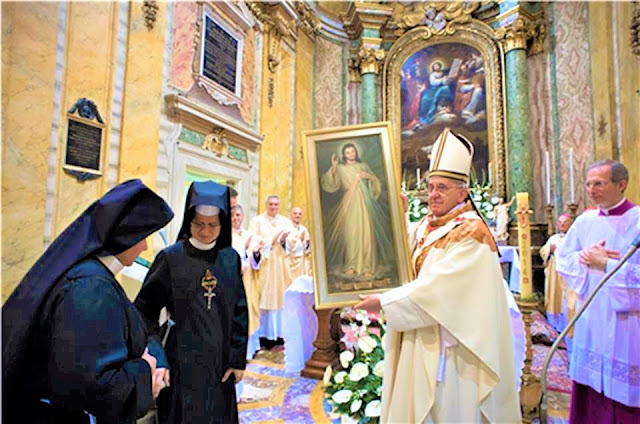 Vatican News reports that Pope Francis wrote a letter marking the 90th anniversary of the first apparition to St Maria Faustina Kowalska in Płock, Poland.
Vatican News report by Christopher Wells -
Pope Francis has written a letter to the Bishop and Church of Płock, Poland, on the occasion of the 90th anniversary of the first apparition of the Merciful Jesus to St Maria Faustina Kowalska, a Polish nun. The apparitions to St Faustina formed the basis of the Divine Mercy devotion.
In his letter, Pope Francis recalls the words heard by St Faustina on 22 February 1931: “Paint a picture according to the pattern you see, with the caption: Jesus, I trust in You. I desire that this image be venerated first in your chapel and then throughout the world.” The image of the Divine Mercy has subsequently spread around the globe.
“I share the joy of the Church of Płock that this special event is already known throughout the world and remains alive in the hearts of the faithful,” Pope Francis writes.

Pope Francis adds feast of Saint Faustina to Roman Calendar
“Ask Jesus for the gift of mercy”
The Holy Father encourages the faithful to “ask Christ for the gift of mercy,” to allow Christ’s mercy “to embrace us and penetrate us,” to have “the courage to return to Jesus, to encounter His love and mercy in the Sacraments," and to “feel His closeness and tenderness,” so that we “might be more capable of mercy, patience, forgiveness, and love.”
He notes that his predecessor, St John Paul II, whom he calls “the Apostle of Mercy,” “wanted the message of God’s merciful love to reach everyone in the world.”
In 2002, during a visit to the Divine Mercy Shrine in Krakow, the Polish Pope said, “This fire of mercy needs to be passed on to the world. In the mercy of God the world will find peace and mankind will find happiness!”
Pope Francis in his turn insists, “This is a special challenge for the Church of Płock, marked by this revelation”; for Sister Faustina’s community, the Sisters of Our Lady of Mercy; for the city of Płock, “and for each one of you.”
“Pass on the fire of Jesus’ merciful love,” Pope Francis writes in conclusion. “Be for everyone a sign of His presence among you.”
Edited from Vatican News by Christopher Wells