Saint February 11 : Our Lady of Lourdes - who Appeared in 1858 as the Immaculate Conception 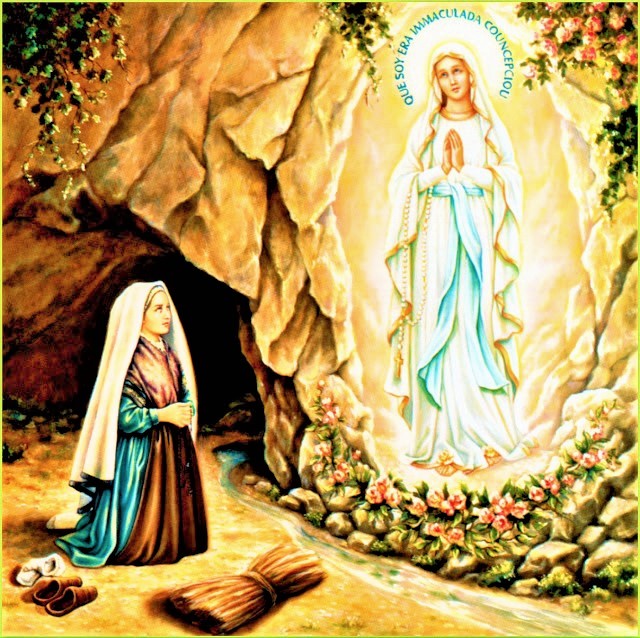 The pilgrimage of Lourdes is founded on the apparitions of the Blessed Virgin to a poor, fourteen-year-old girl, Bernadette Soubiroux. The first apparition occurred 11 February, 1858. There were eighteen in all; the last took place 16 July, of the same year. Bernadette often fell into an ecstasy. The mysterious vision she saw in the hollow of the rock Massabielle was that of a young and beautiful lady. "Lovelier than I have ever seen" said the child. But the girl was the only one who saw the vision, although sometimes many stood there with her. Now and then the apparition spoke to the seer who also was the only one who heard the voice.
Thus, she one day told her to drink of a mysterious fountain, in the grotto itself, the existence of which was unknown, and of which there was no sign, but which immediately gushed forth.
On another occasion the apparition bade Bernadette go and tell the priests she wished a chapel to be built on the spot and processions to be made to the grotto. At first the clergy were incredulous. It was only four years later, in 1862, that the bishop of the diocese declared the faithful "justified in believing the reality of the apparition". A basilica was built upon the rock of Massabielle by M. Peyramale, the parish priest. In 1873 the great "national" French pilgrimages were inaugurated. Three years later the basilica was consecrated and the statue solemnly crowned. In 1883 the foundation stone of another church was laid, as the first was no longer large enough. It was built at the foot of the basilica and was consecrated in 1901 and called the Church of the Rosary. Pope Leo XIII authorized a special office and a Mass, in commemoration of the apparition, and in 1907 Pius X extended the observance of this feast to the entire Church; it is now observed on 11 February.
Never has a sanctuary attracted such throngs. At the end of the year 1908, when the fiftieth anniversary of the apparition was celebrated, although the record really only began from 1867, 5297 pilgrimages had been registered and these had brought 4,919,000 pilgrims. Individual pilgrims are more numerous by far than those who come in groups. To their number must be added the visitors who do not come as pilgrims, but who are attracted by a religious feeling or sometimes merely by the desire to see this far-famed spot. The Company of the Chemins de Fer du Midi estimates that the Lourdes station receives over one million travellers per annum. Every nation in the world furnishes its contingent. Out of the total of pilgrimages given above, four hundred and sixty-four came from countries other than France. They are sent by the United States, Germany, Belgium, Austria, Hungary, Spain, Portugal, Italy, England, Ireland, Canada, Brazil, Bolivia, etc. The bishops lead the way. At the end of the year of the fiftieth anniversary, 2013 prelates, including 546 archbishops, 10 primates, 19 patriarchs, 69 cardinals, had made the pilgrimage to Lourdes. But more remarkable still than the crowd of pilgrims is the series of wonderful occurrences which take place under the protection of the celebrated sanctuary. Passing over spiritual cures, which more often than not escape human observance, we shall confine ourselves to bodily diseases. The writer of this article has recorded every recovery, whether partial or complete, and in the first half-century of the shrine's existence he has counted 3962. Notwithstanding very careful statistics which give the names and surnames of the patients who have recovered, the date of the cure, the name of the disease, and generally that of the physician who had charge of the case, there are inevitably doubtful or mistaken cases, attributable, as a rule, to the excited fancy of the afflicted one and which time soon dispels. But it is only right to note: first, that these unavoidable errors regard only secondary cases which have not like the others been the object of special study; it must also be noted that the number of cases is equalled and exceeded by actual cures which are not put on record. The afflicted who have recovered are not obliged to present themselves and half of them do not present themselves, at the Bureau des Constatations Médicales at Lourdes, and it is from this bureau's official reports that the list of cures is drawn up.
The estimate that about 4000 cures have been obtained at Lourdes within the first fifty years of the pilgrimage is undoubtedly considerably less than the actual number. The Bureau des Constatations stands near the shrine, and there are recorded and checked the certificates of maladies and also the certificates of cure; it is free to all physicians, whatever their nationality or religious belief. Consequently, on an average, from two to three hundred physicians annual visit this marvellous clinic. As to the nature of the diseases which are cured, nervous disorders so frequently mentioned, do not furnish even the fourteenth part of the whole; 278 have been counted, out of a total of 3962. The present writer has published the number of cases of each disease or infirmity, among them tuberculosis, tumours, sores, cancers, deafness, blindness, etc. The "Annales des Sciences Physiques", a sceptical review whose chief editor is Doctor Ch. Richet, Professor at the Medical Faculty of Paris, said in the course of a long article, apropos of this faithful study: "On reading it, unprejudiced minds cannot but be convinced that the facts stated are authentic."

(Taken from Catholic Encyclopedia)
Since this entry was written 70 official miracles have occurred at Lourdes. Over 6 Million visitors come every year to a total of over 200 million pilgrims over the years.