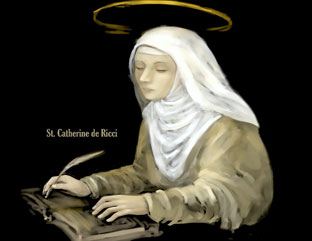 (In baptism, Alessandra Lucrezia Romola), a Dominican nun, of the Third Order, though enclosed, born in Florence, 23 April, 1522; died 2 February, 1590. She is chiefly known to the world for her highly mystical and miraculous life, and especially as the subject of a marvellous, but fully and most carefully authenticated ecstasy, into which she was rapt every week, from Thursday at noon till 4 p.m. on Friday, for several years. In this state she went through all the stages of Our Lord's Passion, actually realizing, and showing forth to others with wonderful vividness, all that His Blessed Mother suffered in witnessing it. Her father, Pier Francesco de' Ricci, was one of an old and respected family of bankers and merchants. Her mother of the Ricasoli family — died when she was a small child, and she was brought up by a devoted stepmother, Fiammetta da Diacceto. The latter soon observed the child's unusual tendency to holiness — particularly to solitary prayer — and did her utmost to foster and develop it. Whilst still a child, Alessandra resolved to join some strictly observant religious order; but the state of relaxation just then was so universal that it was long before she could find what she desired. Her vocation was finally decided during a stay at Prato, where she made acquaintance with the Dominican Convent of San Vincenzio, founded in 1503 by nine ladies who had been devoted followers of Savonarola. Alessandra there found the spirit of religious fervour high enough to satisfy even her ideal; and, after some difficulties with her father, she entered the novitiate, was clothed in 1535 (taking the name of Catherine), and professed in 1536.
Both during her novitiate and for four or five years after profession, she was subjected to humiliating trials from the community, owing to their misunderstanding of some of the high supernatural favours she received; but her holiness and humility eventually triumphed. She was then appointed to one important office after another, finally remaining prioress or sub prioress till her death. During all these years, whilst conscientiously fulfilling every religious duty, she was feeling and showing keen interest in all her relations — especially her brothers — and in numerous friends and "spiritual children". The great "Ecstasy of the Passion", above referred to, happened for the first time in February, 1542, and was renewed every week afterwards for twelve years, when it ceased in answer to the prayers of Catherine herself and the community. The fame of it was bringing so many people of every rank and calling to Prato that the peace and strict observance of the convent were suffering. Catherine de' Ricci lived in an age of great saints; among her contemporaries were St. Charles Borromeo, St. Philip Neri, and St. M. Magdalen de Pazzi. With the two last named she is said to have held in different ways, miraculous intercourse, never having met them in a natural way. She was beatified in 1732 by Clement XII, after many delays in the process, and canonized by Benedict XIV in 1746 on both occasions amid great rejoicings at Prato, where her memory is always kept fresh. The lineal descendants of her community still inhabit the convent of San Vincenzio (now commonly called Santa Caterina), and there her body still reposes. Her feast is kept on the 13th of February.
Catholic Encyclopedia