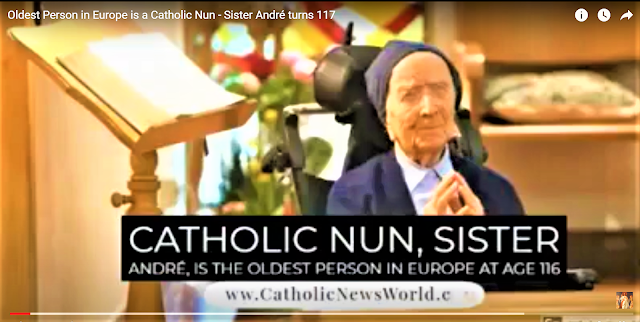 In mid-January 2021, the Catholic nun Sister André tested positive for the corona virus. She herself hadn't even noticed before that she was infected.
Sr. André is the 2nd oldest person in the world after a 118-year-old Japanese woman.
For several years she has been the oldest religious woman in the world.
The soon to be 117-year-old Vincentian lives in the Saint Catherine Labouré nursing home in Toulon, France. She recovered from the infection well and will have her birthday on February 11th and be able to celebrate her birthday. This was reported by the French Catholic weekly magazine “Famille chretienne”.  Many of the other Sisters contracted the virus and 10 of them died.
The nun was born in 1904 with her real name Lucile Randon. She grew up in a family that did not practice Christianity, even though one of her grandfathers had been a Protestant pastor.
In 1923, she received baptism and first communion at her own request. Lucile entered the novitiate in 1944 and worked in hospitals and social institutions until 1979. Despite blindness and hearing difficulties, and despite the fact that she is dependent on outside help and a wheelchair, she has an intact memory and jokes a lot. Outside of the pandemic, she attends in Holy Mass daily  and participates in common evening prayer.