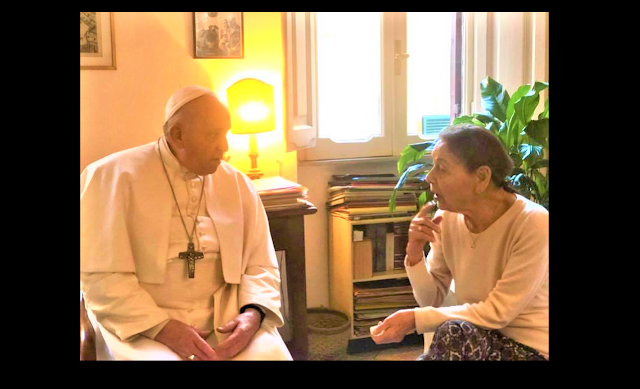 Pope Francis made a surprise visit to the home of the Auschwitz survivor Hungarian author Edith Bruck, who is almost 90 years old, and has lived in Italy for many years. Edith Bruck (Steinschreiber) was born in 1931. In 1944, with her family, she was deported to Auschwitz. Most of her family members did not survive the Holocaust. Edith was liberated in Bergen-Belsen together with her sister Eliz. In 1954 Edith settled in Rome.
On Saturday, February 20, 2021, the Pope visited her home in Rome's centre. According to Vatican News, he had read her interview, which related the horrors she and her family experienced during the Nazi persecution, and was deeply moved; so he asked to meet her.
"I have come here to thank you for your testimony and to pay homage to the people martyred by the insanity of Nazi populism," Pope Francis told her.
"And with sincerity I repeat to you the words that I spoke from my heart at Yad Vashem and that I repeat before every person who, like you, has suffered so much because of this: [I ask] forgiveness, O Lord, in the name of humanity."
In a statement, the Holy See noted that, "the conversation with the Pope revisited those moments of light with which the experience of the hell of the camps was punctuated and evoked the fears and hopes for the time in which we live, emphasizing the value of memory and the role of the elderly in cultivating it and passing it on to the young."
Edith Bruck has dedicated her life to bearing witness to what she saw. She was asked to do so by two strangers, who spoke to her at the Bergen-Belsen concentration camp: "Tell the story. They will not believe you. But if you survive, tell the story, for us too." And she kept faith.
Even as she recounts the darkest moments of the abyss of horror into which she was plunged, and in which she lost a large part of her family, she never fails to fix her gaze on something good and beautiful, some hint of humanity that allowed her to go on living and hoping.
So, for instance, when describing her life in the ghetto - after she and her family were torn from their home in the rural village where they lived - she describes a non-Jewish man who donated a cartload of food to help those who were being persecuted. Later, describing her time working in Dachau digging trenches, she recalls a German soldier throwing his mess tin at her to be washed -- but, she says, "he had left some jam at the bottom for me." As she talks about her time working in the officers' mess, the figure of a cook emerges. He asked Edith her name, and when she gave it, he replied, with a trembling voice, "I have a daughter your age." Having said this, "he pulled a comb from his pocket, and looking at my head of new-grown hair, he gave it to me," she recalled. "I had the sensation of finding myself, after so long, in the presence of a human being. I was moved by the gesture, which was life and hope." (Source: VaticanNews with words of the Pope and statement of the Holy See Press Office)