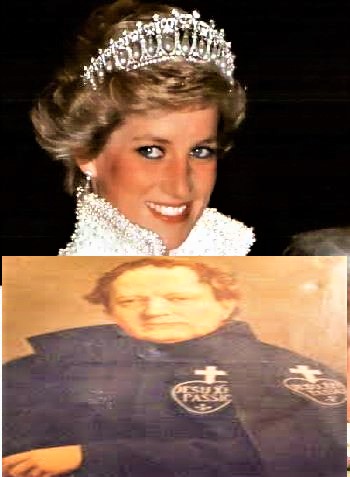 Pope Francis has  approved the heroic virtues of Ignatius of Saint Paul who will now have the title Venerable. Servant of God Ignatius of Saint Paul, an English Passionist priest, was born George Spencer on 21 December 1799 in London, a son of the 2nd Earl Spencer.He is a relative of Diana, Princess of Wales, as well as the great uncle of Second World War Prime Minister Winston Churchill. The Spencer family, mostly members of the Church of England, were the fifth wealthiest family in England at the time.
The great-great-great uncle of Princess Diana, was an Anglican vicar until he converted to Catholicism at the age of 31. As a Catholic, he was ordained a priest and became a Passionist. The then Father Ignatius (the former George Spencer) was drawn to Christianity:
“He had not shown strong feelings toward Christianity until he saw Mozart’s Don Giovanni during a visit to Paris and was struck by a scene in which the anti-hero Giovanni, a seducer and blasphemer, is carried off to Hell by a troop of devils.”
Fr. Ignatius is portrayed in a stained glass in British chapel. He was named pastor of an Anglican parish in Brighton; and there he worked for the poor, the sick and dying. George began to question his Anglican faith. He investigated other Christian traditions. He questioned the truth of the Thirty-Nine Articles, the defining statements of doctrine upon which the English Reformation was based. Also his earlier studies of Scripture did not support the doctrines which were central to Anglicanism. When Spencer began to read the writings of the Early Church Fathers he found that St. John Chrysostom and Gregory the Great explained differences between Catholic and Protestant thought. He was encouraged by other Catholic priests. When Spencer met Ambrose Phillipps de Lisle, a recent English convert to Catholicism, he soon resigned his pastorate on January 30, 1830. He was received into the Catholic Church. There he then studied Catholic tradition and joined the Passionists Order (which lived in poverty). George wrote the story of his conversion from Protestantism to the Catholicism, that was published in Catholic journals of the time. George Spencer’s friend Ambrose de Lisle spoke of the priest’s conversion:
“To renounce the errors and prejudices imbibed in childhood is, perhaps, the most difficult act of duty that a human being can ever be called upon to perform; there it was that he embraced the Catholic faith, thereby accomplishing an act that it will ever be memorable in the history of the Church; an act, the fame of which has penetrated wherever the faith of the Church is preached, from one end of the world to the other, and deservedly so; for it was accompanied with the utter renunciation of all his worldly goods and prospects, all of which he cheerfully sacrificed to follow the dictates of his upright conscience, that he might possess that greatest of all blessings —the communion and privileges of Christ’s true Church.”
Spencer, wished that he could die in poverty like Jesus–”in a ditch, unseen and unknown.” He had a seizure on a country lane near Edinburgh, Scotland, and died there alone. The Vatican's investigations have declared that Father Ignatius Spencer, who is buried in Merseyside, lived a life of "heroic virtue". The priest, is buried in the church of St Anne and Blessed Dominic, in St Helens. He was a great, great, great uncle of Diana, Princess of Wales and thus, a relative of Prince William and Prince Harry. He was born as George Spencer in 1799, he was the youngest child of the second Earl Spencer, who was First Lord of the Admiralty at the time. He grew up at Althorp, where Diana Princess of Wales is now buried. The Spencers, were ancestors of Winston Churchill, were very wealthy. The Vatican, which has been studying his writings since 2007, said it had concluded that he lived a holy life and there was nothing in his written work which was contrary to Roman Catholic teachings on faith and morals.