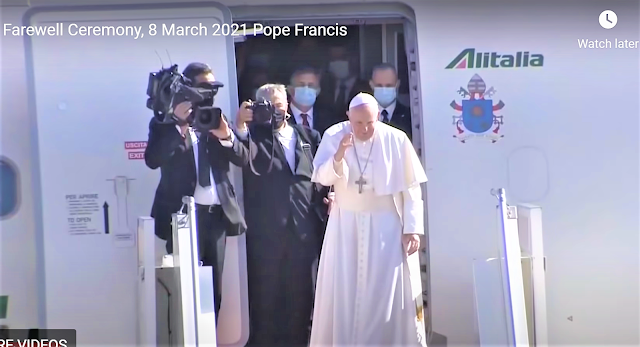 Pope Francis concludes his 33rd Apostolic Journey to Iraq where he went to 6 cities and sites in the north and south of the country. This was the first visit of a pontiff to the Middle Eastern country, which is considered the cradle of civilization. He brought a message of hope, fraternity and peace to all.

This morning, after celebrating Holy Mass in private, the Holy Father Francis took leave of the staff, benefactors and friends of the Apostolic Nunciature and drove to Baghdad International Airport for the farewell ceremony from Iraq. .

Upon his arrival, the Pope was welcomed by the President of the Republic, Mr. Barham Ahmed Salih Qassim, and by his consort at the entrance of the Presidential VIP Lounge where a short private meeting took place. Then, after the greetings of the Delegations, the Holy Father boarded an Alitalia A330 to return to Italy.

The plane with the Holy Father on board returning from the Apostolic Journey to Iraq, took off from Baghdad International Airport at 9.54 local time (7.54 Rome time) and landed at Rome Ciampino Airport at 12.20.