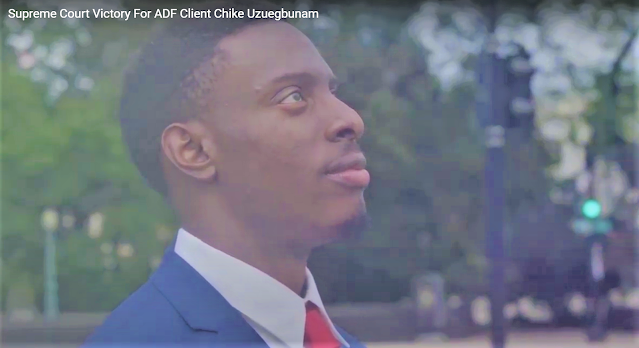 ADF release: This all started in July 2016 when Chike was handing out pamphlets in a plaza on campus and talking about the Gospel with interested students as they passed. Not long after he began, some college officials approached Chike. They informed him that he was not allowed to distribute materials or talk to other students about his beliefs unless he had reserved a time in a campus “speech zone.”

Georgia Gwinnett College had two speech zones—but don’t be fooled into thinking the college broadly encouraged free expression. Combined, the two spaces made up about 0.0015% of campus. If the entire campus were the size of a football field, these “speech zones”—the only places students could exercise their First Amendment rights—would be the size of a piece of notebook paper. On top of that, they were only open for student use for 10% of the week—just 18 hours on weekdays and closed on the weekends.

Despite having already been silenced once, Chike did what the officials asked, reserved a time, and even received approval from college officials for the literature he intended to distribute. But when he began sharing his faith in the speech zone during the time he had reserved, campus police approached him. The officers took his ID card and told him to stop speaking because someone had complained.

According to these officers, Chike's speech violated the speech code in the Student Code of Conduct, which allowed the college to stop speech if someone complained. As a result of the college's policies, Chike was not allowed to speak his message anywhere. After seeing how officials shut down Chike, Joseph decided not to speak on campus at all.

Because public officials silenced these two students on their campus, ADF filed a lawsuit on their behalf.

This was an open-and-shut case involving clear First Amendment violations. But Georgia Gwinnett College doubled down. The college argued that Chike peacefully sharing his religious beliefs should receive no constitutional protection.

The college eventually abandoned this argument and amended its speech policies to allow for speech in any outdoor area of campus—consistent with the U.S. Constitution. Because of this and the fact that Chike graduated, two courts dismissed the case. But that doesn’t change the fact that college officials violated Chike’s right to free speech by silencing him twice and intimidated Joseph into silence.

That's why ADF asked the U.S. Supreme Court to hear this case.

Today, on March 8, 2021, the Court ruled 8-1 that Georgia Gwinnett College officials shouldn't be able to violate the constitutional rights of their students and walk away as if nothing happened. This is great news for anyone who values our constitutional freedoms! Our government officials have a duty to protect our rights, and when they violate them, there should be consequences.

And, thankfully, the Supreme Court made that clear.
FULL TEXT Source: ADF Legal