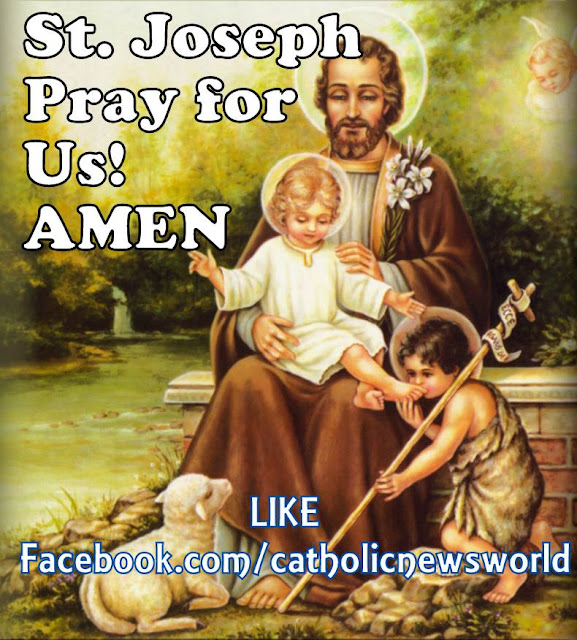 Solemnity of Saint Joseph, spouse of the Blessed Virgin Mary
Lectionary: 543
Reading 1    2 SM 7:4-5A, 12-14A, 16
The LORD Spoke To Nathan And Said:
"Go, Tell My Servant David,
'When Your Time Comes And You Rest With Your Ancestors,
I Will Raise Up Your Heir After You, Sprung From Your Loins,
And I Will Make His Kingdom Firm.
It Is He Who Shall Build A House For My Name.
And I Will Make His Royal Throne Firm Forever.
I Will Be A Father To Him,
And He Shall Be A Son To Me.
Your House And Your Kingdom Shall Endure Forever Before Me;
Your Throne Shall Stand Firm Forever.'"
Responsorial PsalmPS 89:2-3, 4-5, 27 AND 29
R. (37) The son of David will live for ever.
The promises of the LORD I will sing forever;
through all generations my mouth shall proclaim your faithfulness,
For you have said, "My kindness is established forever";
in heaven you have confirmed your faithfulness.
(Mass starts at the 14:43 Mark after the Stations)
R. The son of David will live for ever.
"I have made a covenant with my chosen one,
I have sworn to David my servant:
Forever will I confirm your posterity
and establish your throne for all generations."
R. The son of David will live for ever.
"He shall say of me, 'You are my father,
my God, the Rock, my savior.'
Forever I will maintain my kindness toward him,
and my covenant with him stands firm."
R. The son of David will live for ever.
Reading 2  ROM 4:13, 16-18, 22
Brothers and sisters:
It was not through the law
that the promise was made to Abraham and his descendants
that he would inherit the world,
but through the righteousness that comes from faith.
For this reason, it depends on faith,
so that it may be a gift,
and the promise may be guaranteed to all his descendants,
not to those who only adhere to the law
but to those who follow the faith of Abraham,
who is the father of all of us, as it is written,
I have made you father of many nations.
He is our father in the sight of God,
in whom he believed, who gives life to the dead
and calls into being what does not exist.
He believed, hoping against hope,
that he would become the father of many nations,
according to what was said, Thus shall your descendants be.
That is why it was credited to him as righteousness.
Verse Before THE GOSPEL PS 84:5
Blessed are those who dwell in your house, O Lord;
they never cease to praise you.
GospelMT 1:16, 18-21, 24A
Jacob was the father of Joseph, the husband of Mary.
Of her was born Jesus who is called the Christ.
Now this is how the birth of Jesus Christ came about.
When his mother Mary was betrothed to Joseph,
but before they lived together,
she was found with child through the Holy Spirit.
Joseph her husband, since he was a righteous man,
yet unwilling to expose her to shame,
decided to divorce her quietly.
Such was his intention when, behold,
the angel of the Lord appeared to him in a dream and said,
"Joseph, son of David,
do not be afraid to take Mary your wife into your home.
For it is through the Holy Spirit
that this child has been conceived in her.
She will bear a son and you are to name him Jesus,
because he will save his people from their sins."
When Joseph awoke,
he did as the angel of the Lord had commanded him
and took his wife into his home.
Or LK 2:41-51A
Each year Jesus' parents went to Jerusalem for the feast of Passover,
and when he was twelve years old,
they went up according to festival custom.
After they had completed its days, as they were returning,
the boy Jesus remained behind in Jerusalem,
but his parents did not know it.
Thinking that he was in the caravan,
they journeyed for a day
and looked for him among their relatives and acquaintances,
but not finding him,
they returned to Jerusalem to look for him.
After three days they found him in the temple,
sitting in the midst of the teachers,
listening to them and asking them questions,
and all who heard him were astounded
at his understanding and his answers.
When his parents saw him,
they were astonished,
and his mother said to him,
"Son, why have you done this to us?
Your father and I have been looking for you with great anxiety."
And he said to them,
"Why were you looking for me?
Did you not know that I must be in my Father's house?"
But they did not understand what he said to them.
He went down with them and came to Nazareth,
and was obedient to them.
Prayer to Make a Spiritual Communion-
People who cannot communicate now make spiritual communionAt your feet, O my Jesus I bow down and offer you the repentance of my contrite heart, which abysses itself into its nothingness and Your holy presence. I adore you in the Sacrament of Your love, the ineffable Eucharist. I wish to receive you in the poor home that my heart offers you. In anticipation of the happiness of sacramental communion, I want to possess you in spirit. Come to me, oh my Jesus, that I may come to you. May Your love inflame my whole being, for life and death. I believe in you, I hope in you, I love you. So be it. Amen