INTERVIEW - Pope Emeritus Benedict XVI says "There are not two Popes." and Says He Resigned "..in full conscience..." with Comments on President Biden 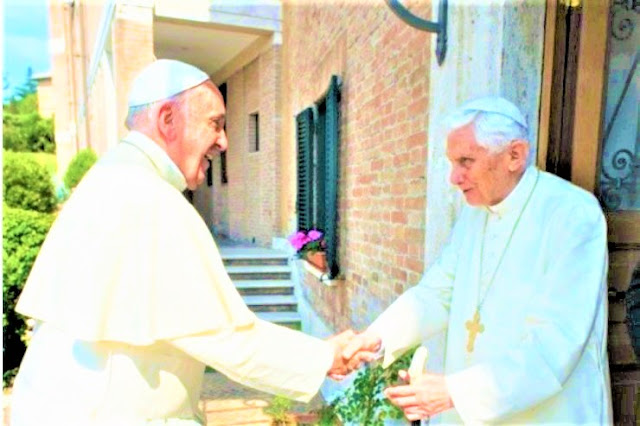 An interview with Pope Emeritus Benedict XVI was just released by the Corriere Italian publication. In the interview the retired Pope explains, "There are not two Popes."

It has been 8 years since the resignation of Pope Benedict XVI from the papacy on Feb. 28, 2013.

The Emeritus says, “It was a painful decision, but I think I did well. My conscience is clear. "

The article written by Massimo Franco, covers the visit that the editor of Corriere della Sera, Luciano Fontana made to the Mater Ecclesiae Monastery where Benedict XVI now resides.

The retired Pope says, "There are no two Popes. The Pope is only one…"

Vatican News provided a translation of excerpts of the article:

Pope Emeritus Benedict XVI has already been vaccinated, he received the first dose and then he was given the second, like Monsignor Gaenswein and most of the inhabitants of the Vatican City. He notes, " I will accompany Francis with my prayer" regarding the trip to Iraq.

The Pope Emeritus said, "It is true, he is Catholic and observant. And he personally is against abortion." "But as president, he tends to present himself in continuity with the line of the Democratic Party ... And on gender politics we have not yet fully understood what his position is...."