Pope Francis Meets with the President of the Republic of Portugal, Marcelo Rebelo de Sousa - VIDEO 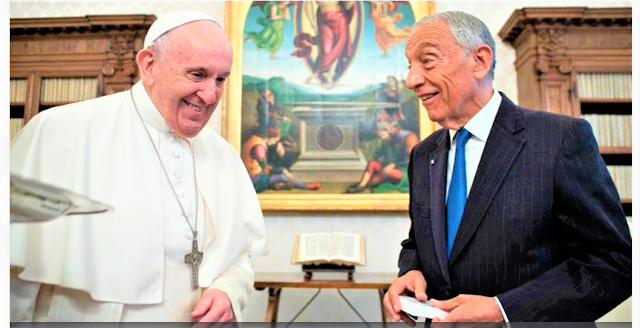 The Holy See released that, in the Vatican Apostolic Palace, the Holy Father Francis received in audience His Excellency Marcelo Rebelo de Sousa, President of the Republic of Portugal, who subsequently met with His Eminence Cardinal Secretary of State Pietro Parolin, accompanied by Archbishop Paul Richard Gallagher, Secretary for Relations with States.

During the visit, the President’s first foreign trip since his re-election, satisfaction was expressed at the good relations between the Holy See and Portugal, as well as the contribution made by the Church to the life of the country, with special reference to the management of the current health crisis, the defence of life, and peaceful social co-existence.

In the context of the Portuguese presidency of the European Union, attention turned to some issues of a regional and international nature, such as multilateralism, overcoming the emergency of the pandemic, and commitment to peace. Source: Vatican.va

According to Romereports the Pope explained that his trip to Iraq was "wonderful" but that he was "still recovering" and that it was "tiring" for him as he is 84 years old.