Pope Francis Says Rediscover Saint Joseph "It will do you good to place yourselves and your vocations under his mantle and learn from him the art of fatherhood..." FULL TEXT 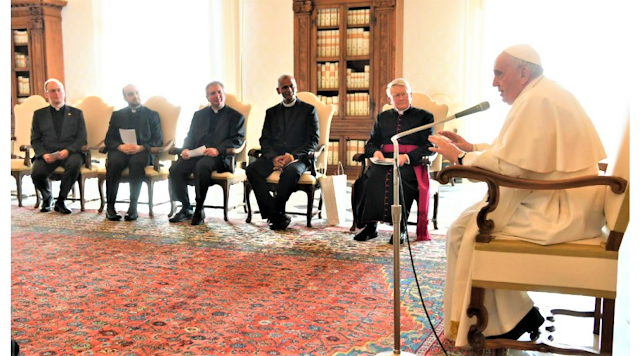 TO THE COMMUNITY OF THE PONTIFICAL BELGIAN COLLEGE

I am pleased to welcome you, on the completion of your college's 175th birthday, the Belgian Pontifical College, which had Saint John Paul II among its students. I thank the Rector, Mons. Smet, for his introductory words.

On the eve of the Solemnity of St. Joseph, in this year dedicated to him, and knowing that the Belgian College has the Custos of the Redeemer as its heavenly patron, we can look to him, as ministers of Christ, to draw some ideas relating to the identity of the pastor and the way of exercising paternity towards those entrusted to us. As you know, fatherhood is the main theme of the Apostolic Letter Patris corde , which I wrote to celebrate the 150th anniversary of the proclamation of Saint Joseph as Patron of the universal Church.

First of all, Saint Joseph is a welcoming father . In fact, having overcome every rebellion and setting aside even legitimate personal projects, he loved and welcomed Mary and Jesus, a bride and a son very different from the vision of family life that he could have desired, but for this reason even more guarded and loved by him . That is, Joseph did not seek explanations for the surprising and mysterious reality that he faced, but accepted it with faith by loving it as it was.

In this sense, St. Joseph is our teacher of spiritual life and discernment, and we can invoke him to be freed from the snares of too many reflections in which every now and then, even with the best of intentions, we end up getting lost. They show our tendency to "grasp" and "possess" what happens to us, rather than welcoming it first of all as it presents itself to us.

Let us think - to give a concrete example and close to us - of a priest who arrives in a new parish. That community pre-exists him, has its own history, made up of joys and wounds, of riches and small miseries, which cannot be ignored in the name of personal pastoral ideas and plans that one cannot wait to apply. This is a risk we can fall into. The new parish priest must first love the community, for free, only because he has been sent to it; and slowly by loving it he will know it in depth and will be able to help set it on new paths.

Then St. Joseph is a guardian father . Being a guardian is an essential part of his vocation and mission. This is a task that Joseph lived "with discretion, with humility, in silence, but with a constant presence and total fidelity, even when he does not understand"; he lived it "in constant attention to God, open to his signs, available to his project, not so much to his own" ( Homily , March 19, 2013 ). Therefore, he has fulfilled this task with the interior freedom of a good and faithful servant who desires only the good of the people entrusted to him.

Guarding - for Joseph, as for every priest who inspires his fatherhood in him - means loving tenderly those entrusted to us, thinking first of all of their good and their happiness, with discretion and with persevering generosity. Guarding is an interior attitude, which leads to never losing sight of others, evaluating from time to time when to withdraw and when to be close, but always maintaining a vigilant, attentive and prayerful heart.

It is the attitude of the shepherd , who never abandons his flock, but places himself with respect to it in a different position according to the concrete needs of the moment: front to open the way, in the middle to encourage, back to gather the last ones. A priest is called to this in his relationship with the community entrusted to him, that is, to be an attentive custodian, ready to change, according to what the situation requires; not to be "monolithic", rigid and as if in a plaster cast in a way of exercising the ministry that is perhaps good in itself, but not capable of grasping the changes and needs of the community.

On the other hand, when a shepherd loves and knows his flock , he knows how to make himself the servant of all (cf. 1 Cor 9:19) and make himself everything to everyone to save someone at any cost (cf. 1 Cor 9:22), as Saint Paul wrote. He does not focus on himself and his own ideas, but on the good of those he is called to guard, avoiding the opposing temptations of domination and neglect.

Finally, Saint Joseph is a father who dreams . Not a "dreamer" in the sense of one with his head in the clouds, detached from reality, no, but a man who knows how to look beyond what he sees : with a prophetic gaze, capable of recognizing God's plan where others see nothing, and thus to have clear the goal towards which to strive. In fact, St. Joseph was able to see in Mary and Jesus not only a young bride and a child: he always saw in them the action of God, the presence of God.

Thus, safeguarding the fragility of the Child and his Mother, Joseph looked beyond his duties as a father of a family and, preferring to believe in God more than his own doubts, he offered himself to him as an instrument for the realization of a plan. greater, in a service rendered in hiding, generous and tireless, until the silent end of one's life.

For priests, in the same way, it is necessary to know how to dream of the community that one loves, in order not to limit oneself to wanting to preserve what exists - conserving and guarding are not synonymous! -; Instead be prepared from the concrete history of the people to promote conversion and renewal in a missionary sense, and grow a pilgrim community, made up of disciples led by the Spirit and "pushed" from the love of God (cf. 2 Cor 5:14) .

Dear priests, in this year dedicated to him, I invite you to rediscover in a particular way in prayer the figure and mission of Saint Joseph, docile to the will of God, humble author of great deeds, obedient and creative servant. It will do you good to place yourselves and your vocations under his mantle and learn from him the art of fatherhood , which you will soon be called to exercise in the communities and in the ministerial areas and services that will be entrusted to you. I accompany you with my prayer and my blessing. And you too, please, pray for me. Thank you.