Pope Francis' Video Message to Bangladesh "..I trust that the growing climate of interreligious encounter and dialogue...will continue to enable believers to express freely.." On Anniversary FULL TEXT + Video 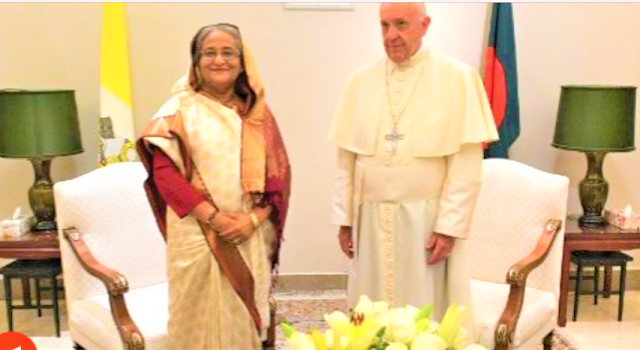 I welcome this opportunity to offer my heartfelt greetings and best wishes to the President, Prime Minister and the beloved people of Bangladesh as the nation celebrates the hundredth birthday of Sheikh Mujibur Rahman and the fiftieth anniversary of the independence of Bangladesh. I join all of you in thanking God for the many blessings bestowed upon Bangladesh over these years.

Bangladesh – “Golden Bengal” (Sonar Bangla) – is a country of unique natural beauty and a modern nation that strives to join unity of language and culture with respect for the different traditions and communities within it. This is one of the legacies which Sheikh Mujibur Rahman left behind for all Bangladeshis. He promoted a culture of encounter and dialogue, marked by wisdom, insight and breadth of vision. He knew that it is only in such a pluralistic and inclusive society, in which every person could live in freedom, peace and security, that a more just and fraternal world can be built.

Bangladesh is a young state, and it has always had a special place in the heart of the Popes, who from the start have expressed solidarity with its people, sought to accompany them in overcoming initial adversities, and supported them in the demanding task of nation building and development. It is my hope that the good relations between the Holy See and Bangladesh will continue to flourish. So too, I trust that the growing climate of interreligious encounter and dialogue, which I witnessed during my visit, will continue to enable believers to express freely their deepest convictions about the meaning and purpose of life, and thus contribute to promoting the spiritual values that are the sure basis for a peaceful and just society.

Dear brothers and sisters, as you mark the hundredth anniversary of your independence, I renew my firm conviction that the future of the democracy and health of the political life of Bangladesh are essentially linked to its founding vision and to the legacy of sincere dialogue and respect for legitimate diversity that you have sought to achieve over these years.

As a friend of Bangladesh, I encourage each of you, particularly the younger generations, to devote yourselves anew to working for peace and prosperity for the noble nation that you represent. And I ask all of you to continue in your work of generosity and humanitarian outreach to the refugees, the poor, the underprivileged and those who have no voice.

With these heartfelt good wishes, I invoke upon Golden Bangladesh and all its citizens an abundance of divine blessings.