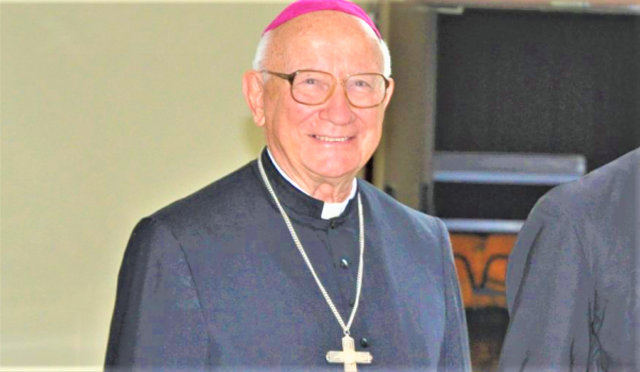 Bishop Yves Ramousse, who was Apostolic Vicar of Phnom Penh from 1962 to 1976, has died. The Bishop who led the recognition of the Cambodian Church to the government. French Bishop and missionary Yves Ramousse, was also in a second period in Cambodia, from 1992 to 2001. He died on February 25, 2021, in France, at the age of 93, a victim of Covid-19.
According to Fides, as a member of the Society of Foreign Missions of Paris (MEP), he went down in history for pastoral and missionary action in Cambodia in the second half of the 20th century and also in the phase following the season of the "new democratic Kampuchea", the era of Khmer Rouge.
Fides reports that starting from 1975, when they took power, all religious expressions were prohibited, while all foreigners were expelled, including Catholic priests and religious, and a wave of violence and repression began in which about two million Cambodians died as a result of executions, hunger or disease. At the time, the French bishop Yves Ramousse himself was at the head of the Cambodian Church, whose work "allowed the Church of Cambodia to live and rise from the ashes in the 1990s. If today Cambodians are happy and free to follow Christ, they owe it to Ramousse", reminds Olivier Schmitthaeusler, who also belongs to the MEP, today Apostolic Vicar of Phnom Penh. Ramousse, given his imminent exile, recalled priest Joseph Chhmar Salas to his homeland, ordaining him bishop and appointed coadjutor for the Apostolic Vicariate of Phnom Penh. Salas was thus able to assume the pastoral and spiritual guidance of the people, but he died of starvation in 1977 and is one of the martyrs of the Khmer Rouge age, for whom the Cambodian Church has started the process for the official recognition of martyrdom. Joining the Foreign Missions of Paris at a young age, Yves Ramousse was ordained a priest in 1953 and left for Cambodia in 1957. Appointed Apostolic Vicar of Phnom Penh at the age of 35, he participated in the Second Vatican Council and in 1968 founded the Episcopal Conference of Laos and Cambodia (CELAC), helping to apply the Council's teachings to Cambodian reality, such as the celebration of the sacraments in the local language and the translation of the Bible into Khmer language. The suffered exile from what he considered his second homeland, he will define as "the negation of the missionary vocation". With the end of the civil war and the approval of the new Constitution (1993), Ramousse returns to Cambodia to find a destroyed Church: churches razed to the ground, the baptized missing, Cambodian priests and religious disappeared. Appointed again in 1992 Apostolic Vicar, he dedicated himself to the work of spiritual, pastoral and social reconstruction. In 1994, after negotiations with the royal government of Cambodia, he obtained the connection of diplomatic relations with the Holy See. In 1997, he rejoiced at the official approval of the statutes of the Catholic Church as a religious community in itself, and not as an NGO. The Cambodian Church of today (the baptized are about 25 thousand souls out of 15 million inhabitants), remembers the simple and passionate spiritual, pastoral and missionary contribution. (PA) (Edited from Agenzia Fides, 27/2/2021)