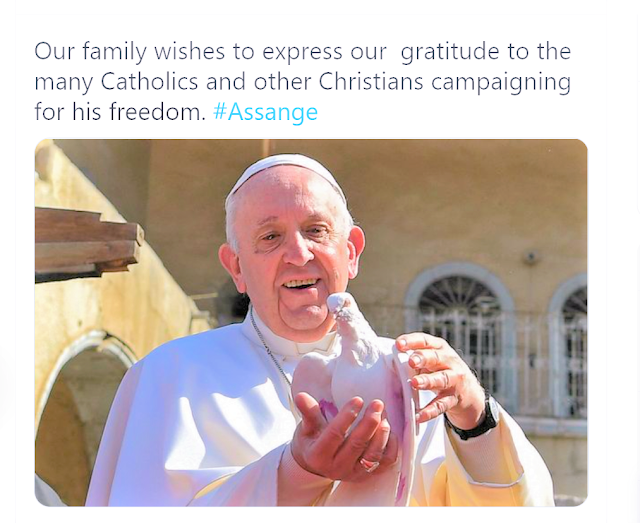 After a hard night, Julian woke up this morning to a kind, personal message from Pope Francis @pontifex delivered to his cell door by the prison priest.

Our family wishes to express our gratitude to the many Catholics and other Christians campaigning for his freedom. #Assange pic.twitter.com/QwHDDvxVqH

Stella Moris explained that the chaplain at the prison in Belmarsh, UK delivered the message on Palm Sunday. The United States accuses the founder of WikiLeaks of having revealed classified information and is seeking to extradite and bring him to court.  In 2010,  Assange published over 250,000 diplomatic documents, many being “confidential.” The Holy See holds these messages to be private and neither confirms nor denies their validity. They are generally seen as gestures of humanitarian support not necessarily an endorsement of the ideas of the person.
FOLLOW Catholic News World on Twitter.com/catholicnews1
DONATE Now to Catholic News World, a Mission, which brings the Gospel to over 200 Countries World Wide and Supports Poor Christians. Easy Just Click the LINK below! If you do not support Christian media who will? Every little bit helps - as a Donor you and your Family will be added to our Church Prayers - You can add your prayer intention on the Donation site "Donor Wall":
https://donorbox.org/support-catholic-news-world-we-need-