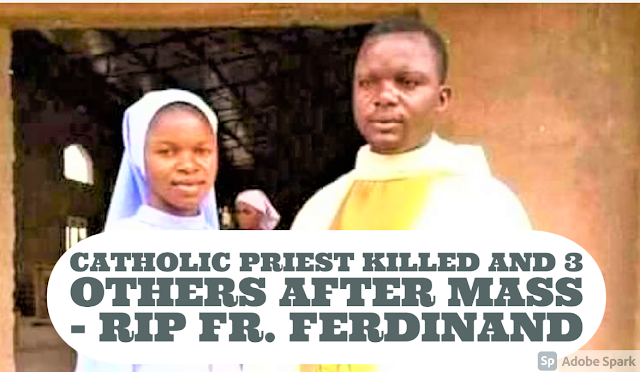 The Priest of St. Paul’s Catholic Church, Nigeria, Benue State,  Fr. Ferdinand Ngugban, and three parishioners have been killed, by armed men. The Vanguard reports that Father Ngugban was sitting outside the church at about 7:30 am after the morning mass when the assailants invaded the church.
A Catholic priest, Father Ferdinand Fanen Nguban, and at least three other people were killed in an attack on Tuesday, March 30, 2021 at a parish in Benue State, in Nigeria's middle belt region.
The priest had just finished celebrating the morning Mass and was within the church premises when the unknown assailants shot at him.
On Wednesday, March 31, 2021, a statement was released from the Chancellor of the Diocese of Katsina-Ala, Fr Fidelis Phelle Akumbul who wrote : “After celebrating Mass and while he prepared to leave for Chrism Mass at St. Gerard Majella Cathedral, Katsina-Ala, to renew his priestly vows alongside his brother priests, there was pandemonium among the internally displaced persons who took refuge in the parish premises.”
“Fr Ferdinand went out to find out the cause of the confusion. He was shot in the head as he tried to take cover after sighting armed gunmen,” the statement said.
Vatican News reports that several houses were also said to have been set ablaze during the Tuesday attack by the gunmen.

This latest attack comes just a few days after the release of another priest, Fr. Harrison Egwuenu of the Diocese of Warri, who was kidnapped by gunmen on 15 March.
Edited from Vanguard News and Vatican News