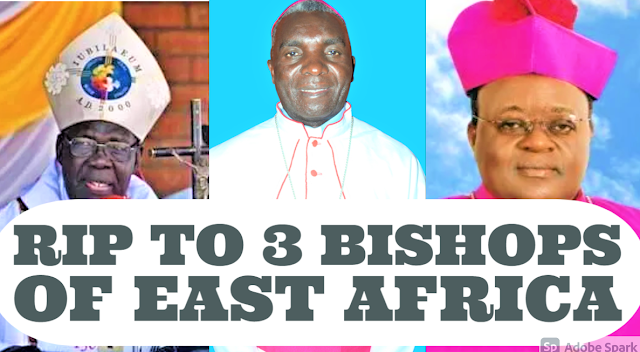 The Church in the Association of Members Episcopal Conferences in Eastern Africa (AMECEA) region, is mourning the loss of three Prelates that has occurred in the member conferences Uganda, South Sudan and Tanzania in a span of four days.
On Saturday, April 3, the region received the message on the sudden death of Archbishop Cyprian Kizito Lwanga of Kampala Archdiocese in Uganda who was found dead a day after he joined the Uganda Joint Christian Council to commemorate the Way of the Cross on Good Friday, April 2.
After the announcement of Kampala’s Archbishop’s death, the region has again been sorrowed with the loss of Archbishop Paolino Lukudu Loro, Emeritus of Juba Archdiocese, South Sudan who died on Easter Monday, April 5, while undergoing treatment in Kenya.
As if this is not enough, the AMECEA region is shocked with the loss of Bishop Alfred Leonhard Maluma of Tanzania’s Njombe diocese which occurred on Tuesday, April 6, in Muhimbili National Hospital, Tanzania.
Addressing the President of Uganda Episcopal Conference (UEC) Bishop Joseph Anthony Zziwa, the Chairman of AMECEA, Bishop Charles Sampa Kasonde highlighted that Archbishop Lwanga of Kampala “was a pillar of our Catholic faith not only in the Archdiocese which hosts the shrine of Uganda Martyrs but the entire AMECEA region.”
According to the Chairman who is the Local Ordinary of Solwezi diocese, Zambia, Archbishop Lwanga who after a post mortem examination is said to have died of heart attack due to a blood clot in the heart vessels, “was so welcoming to all the pilgrims coming to Namugongo for the feast of Saint Charles Lwanga and his companions every year.”
In his Condolences message on Tuesday, April 6, to the President of Sudan and South Sudan Catholic Bishops’ Conference (SSCBC) Bishop Tombe Trille Kuku, AMECEA Chairman acknowledged that Archbishop Emeritus Lukudu of Juba Archdiocese was an advocate to the people of South Sudan especially in times of difficulties.
“Archbishop Lukudu was indeed the anchor of Catholic faith for Sudan and South Sudan during the most difficult times of your conference when the Church suffered martyrdom and yet he stood strong for the poor,” Bishop Kasonde disclosed.
He added, “Even when the Sudanese people were forced into refugee camps, he held the Church together and assured that they have shepherds who care for them.”
Archbishop Lukudu will be remembered as a key member of the AMECEA Executive Board “whose insight and zeal to build a self-sustaining local church was never withered,” Bishop Kasonde noted on behalf of the AMECEA Prelates.
He further thanked Archbishop Ameyu and the clergy of the Archdiocese of Juba for the care and support they gave to the late Archbishop Lukudu during his retirement until his demise.
Meanwhile conveying condolences message on behalf of AMECEA bishops to President of Tanzania Episcopal Conference (TEC) Archbishop Gervas Mwasikwabhila Nyaisonga and the Church of Tanzania, the AMECEA Chairman described Bishop Maluma as a Shepherd of warm personality.
“Bishop Alfred Maluma will certainly be missed by his priests, Religious and Christians whom he served with total dedication as their Shepherd since his appointment,” Bishop Kasonde wrote adding that “many bishops in AMECEA region are mourning this loss together with you because of his warm, humble, simple, generous and welcoming personality.”
“I am aware that he was well connected with the bishops in the Catholic Church of Zambia as well as Malawi and he was very supportive to them. He strongly believed that the Church in the region is able and capable of sustaining itself,” the Chairman added.
AMECA bishops through the chairman implored for God’s intervention, asking “our loving heavenly Father to grant the late Prelates the graces to join the Risen Lord whom they served.”
FULL TEXT Release: http://amecea.blogspot.com/