FULL TEXT - Pope Francis says "...in these dark months of pandemic we hear the Risen Lord who invites us to start again, to never lose hope." at Easter Vigil Homily + Video 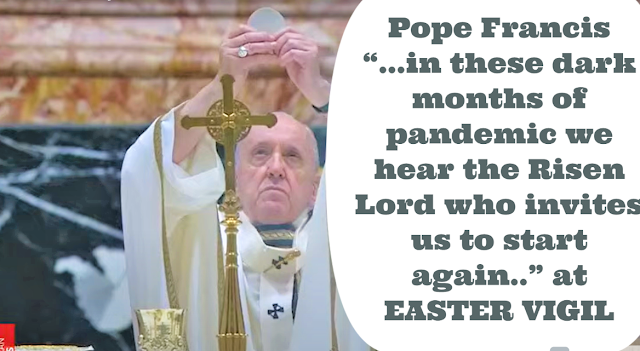 EASTER VIGIL IN THE HOLY NIGHT

The women thought they would find the body to anoint, but instead they found an empty tomb. They had gone to mourn a dead man, but instead they heard an announcement of life. For this reason, the Gospel says, those women "were full of fear and amazement" ( Mk 16: 8), full of fear, fearful and full of amazement. Amazement: in this case it is a fear mixed with joy, which surprises their hearts to see the great stone of the tomb rolled away and into a young man in a white robe. It is the wonder of hearing those words: «Do not be afraid! You are looking for Jesus of Nazareth, the crucified one. He is risen "(v. 6). And then that invitation: "He goes before you to Galilee, there you will see him" (v. 7). We too welcome this invitation, the Easter invitation: we go to Galilee where the Risen Lord precedes us. But what does it mean to "go to Galilee"?

Going to Galilee means, above all, starting over. For the disciples it means returning to the place where the Lord sought them for the first time and called them to follow him. It is the place of the first meeting and the place of the first love. From that moment, leaving the nets, they followed Jesus, listening to his preaching and witnessing the wonders he performed. Yet, even though they were always with him, they did not fully understand him, they often misunderstood his words and ran away from the cross, leaving him alone. Despite this failure, the Risen Lord presents himself as the One who, once again, precedes them in Galilee; it precedes them, that is, it stands before them. He calls them and calls them to follow him, without ever getting tired. The Risen One is telling them: “Let's start again from where we started. Let's start again. I want you again with me, despite and beyond all the failures ”. In this Galilee we learn the amazement of the Lord's infinite love, which traces new paths within the paths of our defeats. And so is the Lord: he traces new paths within the paths of our defeats. He is like that and he invites us to Galilee to do this.

Here is the first Easter announcement that I would like to deliver to you: it is always possible to start over again , because there is always a new life that God is capable of restarting in us beyond all our failures. Even from the rubble of our heart - each of us knows, knows the rubble of his own heart - even from the rubble of our heart God can build a work of art, even from the ruinous fragments of our humanity God prepares a new history. He always precedes us: in the cross of suffering, desolation and death, as well as in the glory of a life that is reborn, of a history that changes, of a hope that is reborn. And in these dark months of pandemic we hear the Risen Lord who invites us to start again, to never lose hope.

Going to Galilee, secondly, means following new paths. It is moving in the opposite direction to the tomb. Women look for Jesus at the tomb, that is, they go to remember what they lived with him and which is now lost forever. They go to stir up their sadness. It is the image of a faith that has become a commemoration of a beautiful but finished fact, only to be remembered. Many - we too - live the "faith of memories", as if Jesus were a character from the past, a friend of his youth now far away, a fact that happened a long time ago, when I attended catechism as a child. A faith made up of habits, of things from the past, of good childhood memories, which no longer touches me, no longer challenges me. Going to Galilee, on the other hand, means learning that faith, to be alive, must get back on the road. It must revive the beginning of the journey every day, the amazement of the first encounter. And then trust, without the presumption of already knowing everything, but with the humility of one who lets himself be surprised by God's ways. We are afraid of God's surprises; we are usually afraid that God will surprise us. And today the Lord invites us to let ourselves be surprised. We go to Galilee to discover that God cannot be placed among the memories of childhood but is alive, always surprising. Risen, he never ceases to amaze us.

Here is the second Easter announcement: faith is not a repertoire of the past, Jesus is not an outdated character. He is alive, here and now . Walk with you every day, in the situation you are experiencing, in the trial you are going through, in the dreams you carry inside. It opens new ways where it seems to you that there are none, it pushes you to go against the tide of regret and the "already seen". Even if everything seems lost to you, please open yourself in amazement to its novelty: it will surprise you.

Going to Galilee also means going to the borders. Because Galilee is the most distant place: in that composite and variegated region live those who are farthest from the ritual purity of Jerusalem. Yet Jesus began his mission from there, addressing the announcement to those who carry on daily life with difficulty, addressing the announcement to the excluded, the frail, the poor, to be the face and presence of God, who goes to seek without whoever is discouraged or lost, who moves to the limits of existence because in his eyes no one is last, no one excluded, get tired. There the Risen One asks his followers to go, even today he asks us to go to Galilee, to this real "Galilee". It is the place of daily life, they are the roads we travel every day, they are the corners of our cities where the Lord precedes us and makes himself present, right in the life of those who pass by and share with us time, home, work, efforts and hopes. In Galilee we learn that we can find the Risen One in the faces of the brothers, in the enthusiasm of those who dream and in the resignation of those who are discouraged, in the smiles of those who rejoice and in the tears of those who suffer, especially in the poor and in those who are marginalized. We will be amazed at how God's greatness is revealed in littleness, how his beauty shines in the simple and the poor.

Here, then, is the third Easter proclamation: Jesus, the Risen One, loves us without boundaries and visits each of our life situations. He planted his presence in the heart of the world and invites us too to overcome barriers, overcome prejudices, approach those around us every day, to rediscover the grace of everyday life . Let's recognize it present in our Galilee, in everyday life. With him, life will change. Because beyond all defeats, evil and violence, beyond all suffering and death, the Risen One lives and the Risen One leads history.

Sister, brother, if on this night you carry a dark hour in your heart, a day that has not yet dawned, a buried light, a broken dream, go, open your heart with amazement at the announcement of Easter: " risen! He awaits you in Galilee ”. Your expectations will not remain unfinished, your tears will be dried, your fears will be overcome by hope. Because, you know, the Lord always goes before you, always walks ahead of you. And, with him, life always begins again.