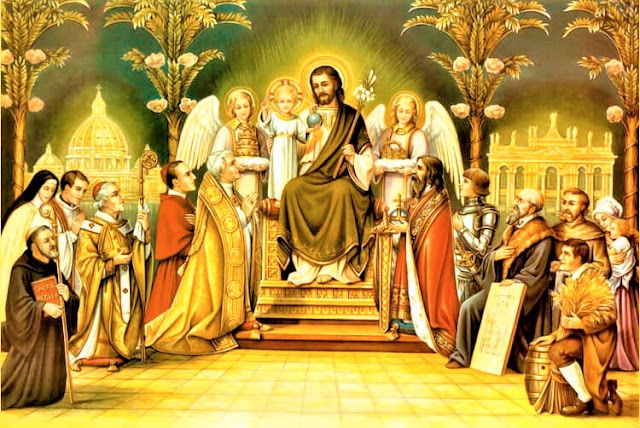 Saturday of the Fourth Week of Easter
Lectionary: 284
Reading I
Acts 13:44-52
On the following sabbath
almost the whole city
gathered to hear the word of the Lord.
When the Jews saw the crowds, they were filled with jealousy
and with violent abuse contradicted what Paul said.
Both Paul and Barnabas spoke out boldly and said,
“It was necessary that the word of God be spoken to you first,
but since you reject it
and condemn yourselves as unworthy of eternal life,
we now turn to the Gentiles.
For so the Lord has commanded us,
I have made you a light to the Gentiles,
that you may be an instrument of salvation
to the ends of the earth.”
The Gentiles were delighted when they heard this
and glorified the word of the Lord.
All who were destined for eternal life came to believe,
and the word of the Lord continued to spread
through the whole region.
The Jews, however, incited the women of prominence who were worshipers
and the leading men of the city,
stirred up a persecution against Paul and Barnabas,
and expelled them from their territory.
So they shook the dust from their feet in protest against them
and went to Iconium.
The disciples were filled with joy and the Holy Spirit.

Alleluia
Jn 8:31b-32
R. Alleluia, alleluia.
If you remain in my word, you will truly be my disciples,
and you will know the truth, says the Lord.
R. Alleluia, alleluia.
Gospel
Jn 14:7-14
Jesus said to his disciples:
“If you know me, then you will also know my Father.
From now on you do know him and have seen him.”
Philip said to Jesus,
“Master, show us the Father, and that will be enough for us.”
Jesus said to him, “Have I been with you for so long a time
and you still do not know me, Philip?
Whoever has seen me has seen the Father.
How can you say, ‘Show us the Father’?
Do you not believe that I am in the Father and the Father is in me?
The words that I speak to you I do not speak on my own.
The Father who dwells in me is doing his works.
Believe me that I am in the Father and the Father is in me,
or else, believe because of the works themselves.
Amen, amen, I say to you,
whoever believes in me will do the works that I do,
and will do greater ones than these,
because I am going to the Father.
And whatever you ask in my name, I will do,
so that the Father may be glorified in the Son.
If you ask anything of me in my name, I will do it.”
Prayer to Make a Spiritual Communion-
People who cannot communicate now make spiritual communionAt your feet, O my Jesus I bow down and offer you the repentance of my contrite heart, which abysses itself into its nothingness and Your holy presence. I adore you in the Sacrament of Your love, the ineffable Eucharist. I wish to receive you in the poor home that my heart offers you. In anticipation of the happiness of sacramental communion, I want to possess you in spirit. Come to me, oh my Jesus, that I may come to you. May Your love inflame my whole being, for life and death. I believe in you, I hope in you, I love you. So be it. Amen