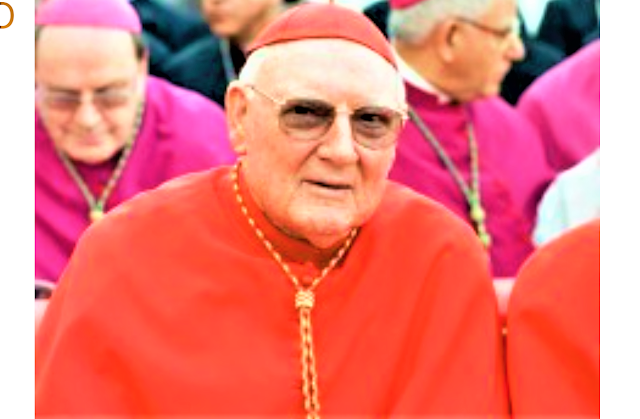 The former President of the Pontifical Council for Promoting Christian Unity, Cardinal Edward Cassidy, died in Newcastle, Australia, on Saturday, April 10, 2021, at the age of 96.

Just hearing word of the death of Cardinal Edward (Ted) Cassidy. A wonderful man of God and servant of the Church, and a terrific Australian. May Mary and the saints welcoming to the eternal feast at the Lord’s table. https://t.co/ofzBbDqPHT

Biography from Vatican.va
Cardinal Edward I. Cassidy, President emeritus of the Pontifical Council for the Promotion of Christian Unity, was born on 5 July 1924 in Sydney, Australia.
After having finished his secondary schooling in Parramatta, Sydney, he took a state government job in New South Wales, and for about three months he worked at the Ministry of Transport and Traffic Control. In February 1943 he entered the seminary of St. Colombia in Springwood, and the following year he attended the College of St. Patrick in Manly, where he finished his studies. He was ordained to the priesthood on 23 July 1949 at St. Mary’s Cathedral. From 1950 to 1952 Father Edward served in the parish of Yenda in the diocese of Wagga Wagga.
Beginning in 1952 he studied Canon Law at the Pontifical Lateran University in Rome, earning his doctorate in 1955 with high honours for his historical and juridical study on the Apostolic Delegate of the Church. In 1953 he trained at the Pontifical Ecclesiastical Academy at Piazza della Minerva. He received his diploma and entered the diplomatic service of the Holy See. His first post was at the Apostolic Internunciature in India (1955-1962); he then spent five years, from 1962 to 1967, at the Apostolic Nunciature of Dublin; two years in El Salvador (1967-1969); one year in Argentina.
He was elected Titular Archbishop of Amanzia on 27 October 1970 and at the same time he was appointed Apostolic Pro-Nuncio to the Republic of China (Taiwan). He received episcopal ordination on 15 November 1970. In 1972 he was appointed the first Apostolic Pro-Nuncio to Bangladesh, a country that had just obtained independence, as well as the Apostolic Delegate to Burma. On 25 March 1979 he was named Apostolic Delegate to South Africa and Apostolic Pro-Nuncio to Lesotho, assignments he held until 6 November 1984, when he was sent as Apostolic Pro-Nuncio to the Netherlands.
On 23 March 1988 Archbishop Cassidy was appointed Substitute of the Secretary of State for General Affairs, the post he filled until 12 December 1989, when he was appointed President of the Pontifical Council for the Promotion of Christian Unity.
President emeritus of the Pontifical Council for the Promotion of Christian Unity, 3 March 2001.
President Delegate of the Special Assembly for Oceania of the Synod of Bishops, November-December 1998.
He was also member of the Committee of the Great Jubilee of the Year 2000.
Created and proclaimed Cardinal by St. John Paul II in the consistory of 28 June 1991, of the Title of S. Maria in via Lata (St. Mary in Via Lata), deaconry elevated pro hac vice to presbyteral title on 26 February 2002.