Saint April 6 : St. William of Eskilsoe a French Abbot and Confessor who died in 1203 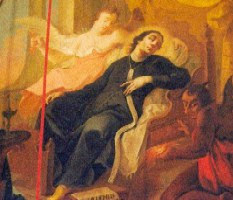 St. William of Eskilsoe
ABBOT OF ESKILLE, CONFESSOR
Born:1125 at Paris, France
Died:
6 April (Easter Sunday) 1203 in Denmark
Canonized:
21 January 1224 by Pope Honorius III
He was born of an illustrious family in Paris, about the year 1105, and received his education in the abbey of St. Germain-des-Prez, under his uncle Hugh, the abbot. By the regularity of his conduct, and the sanctity of his manners, he was the admiration of the whole community. Having finished his studies, he was ordained sub-deacon, and installed canon in the church of St. Genevieve au-Mont. His assiduity in prayer, love of retirement and mortification, and exemplary life, seemed a troublesome censure of the slothful and worldly life of his colleagues; and what ought to have gained him their esteem and affection, served to provoke their envy and malice against him.
Having in vain endeavored to prevail on this reformer of their chapter, as they called him, to resign his canonry, in order to remove him at a distance, they presented him to the curacy of Epinay, a church five leagues from Paris, depending on their chapter. But not long after, Pope Eugenius III. coming to Paris, in 1147, and being informed of the irregular conduct of these canons, he commissioned the celebrated Suger, abbot of St. Denys, and prime minister to King Louis the Young, to expel them, and introduce in their room regular canons from the abbey of St. Victor: which was happily carried into execution, Eudo of St. Victor's being made the first abbot. St. William with joy embraced this institute, and was by his fervor and devotion a pattern to the most perfect. He was in a short time chosen sub-prior.
The perfect spirit of religion and regularity which he established in that community, was an illustrious proof of the incredible influence which the example of a prudent superior has over docile religious minds. His zeal for regular discipline he tempered with so much sweetness and modesty in his injunctions, that made all to love the precept itself, and to practice with cheerfulness whatever was prescribed them. The reputation of his wisdom and sanctity reached the ears of Absalon, bishop of Roschild, in Denmark, who, being one of the most holy prelates of his age, earnestly sought to allure him into his diocese. He sent the provost of his church, who seems to have been the learned historian Saxo the Grammarian, to Paris on this errand. A prospect of labors and dangers for the glory of God was a powerful motive with the saint, and he cheerfully undertook the voyage. The bishop appointed him abbot of Eskille, a monastery of regular canons which he had reformed. Here St. William sanctified himself by a life of prayer and austere mortification; but had much to suffer from the persecutions of powerful men, from the extreme poverty of his house in a severe climate, and, above all, from a long succession of interior trials: but the most perfect victory over himself was the fruit of his constancy, patience, and meekness. On prayer was his chief dependence, and it proved his constant support.
During the thirty years of his abbacy, he had the comfort to see many walk with fervor in his steps. He never left off wearing his hair-shirt, lay on straw, and fasted every day. Penetrated with a deep sense of the greatness and sanctity of our mysteries, he never approached the altar without watering it with his tears, making himself a victim to God in the spirit of adoration and sacrifice, together with, and through the merits of the holy victim offered thereon: the dispositions in which every Christian ought to assist at it. He died on the 6th of April, 1203, and was canonized by Honorius III. in 1224.
See his life by a disciple in Surius, and at large in Papebroke's Continuation of Bollandus, t. 1, Apr. p. 620. Also M. Gourdan in his MSS. Lives of Illustrious Men among the regular Canons at St. Victor's, in Paris, kept in the library of MSS. in that house, in fol. t. 2, pp. 324 and 814.
SOURCE: The Lives of the Fathers, Martyrs, and