Wow Pope Francis Makes Surprise Visit to Poor and Homeless Receiving Vaccine on His Name Day and Gifts Them with Chocolate! VIDEO 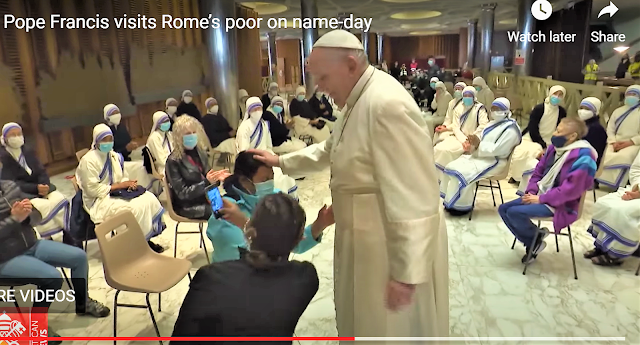 Vatican News reports that Pope Francis made a surprise visit to a group of Rome’s poor and homeless people, as they receive their second dose of the Covid-19 vaccine in the Vatican.
On the feast of St. George (Jorge in Spanish), Pope Francis' Name Day he made a surprise visit.
The Pope supported the Papal Almoner’s project to provide free Covid-19 vaccines for a group of around 600 vulnerable people.
He also showed up in-person at the Paul VI Hall on Friday to visit them as they received their second jab.

According to the Holy See Press Office, the Pope spent around half an hour with those present.
He walked through the audience hall, greeting people as he walked along.
Before he left, Pope Francis stopped to offer a large chocolate Easter egg which was distributed to the volunteers, “while respecting all health norms.”
Those present then sang a song of well-wishes for the Pope’s name-day.
“As he stopped to speak to several volunteers in a joyous and cordial environment, the Holy Father thanked them and encouraged them to ‘continue your hard work!’” read the Press Office statement.
Cardinal Konrad Krajewski, the Papal Almoner, then thanked all the volunteers and health workers for their part in organizing the vaccination campaign.
Pope’s name-day marked with Covid-19 vaccines for Rome’s poor
Those receiving the Pfizer-BioNTech vaccine were part of a larger group of 1,400 who got the first jab during Holy Week.

The group includes several guests of a home run by the Missionaries of Charity, people receiving aid from the St. Egidio Community, and others helped by a group called “Medicina Solidale.”
Source: Vatican News.va